In this month’s cargo news section we report on two incidents involving cargo vessels which ended up with the ships in question being brought to port for repairs, coincidentally both to the Tyne, after one suffered engine problems and the other went aground when leaving port. These incidents seem to be the tip of the iceberg as far as maritime safety is concerned. While new SOLAS regulations should see ships built to be as safe as possible, UK government cutbacks to the Maritime and Coastguard Agency threaten to undermine other efforts to improve safety at sea.

According to Nautilus, the number of incidents in which the Coastguard is involved has almost doubled in the last ten years, but more significantly those shipping-related emergencies have become considerably more challenging due to the increase in the size of passenger and cargo vessels, and the complexity of some cargoes. Yetthe government wants to reduce the servicesprovided by the Coastguard when they are n 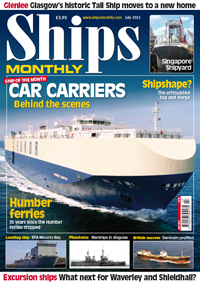 eeded more than ever.

The current government proposals would see ten of the existing 18 Coastguard rescue coordination centres close, the withdrawal of the emergency towing vessels and an end to the Marine Incident Response Group offshore fire-fighting service, while there remains continued uncertainty over SAR helicopter provision. Concern is often voiced about the challenge faced should a cruise ship sink, but removing so many of the maritime emergency systems that were put in place in response to disasters such as those of the tanker Braer and Sea Empress is short-sighted, and in the long-run could prove to be anything but cost effective.

On a more positive note, it seems that the preserved tall ship in Glasgow harbour, Glenlee, is to get a new lease of life as a result of her move to a new berth alongside the new Riverside Museum, as reported on page 7. The tall ship has been at Glasgow’s Yorkhill Quay for 12 years, where she was one of the city’s most popular visitor attractions, and no doubt she will continue to be popular in her new location.