This month we have a series of excellent articles looking at cargo ships, cargo handling and classic cargo liners. In previous months we have focussed on modern cargo vessels in the shape of the giant container ships carrying goods from the Far East to Britain and car carriers bringing vehicles to the UK. So this issue harks back to a different era and a different way of moving goods, and many see these traditional cargo ships as the most elegant and graceful ever to be built.

Few historic cargo vessels survive, and the post-war cargo liners featured in our 23-page Cargo Special are sadly no longer in existence. So the return of the historic coaster Robin (see page 8) after the first stage in her restoration is to be greatly welcomed. She was built in 1890 at Blackwall on the Thames, and It has yet to be decided where in London she will be displayed when she is opened to the public next year. 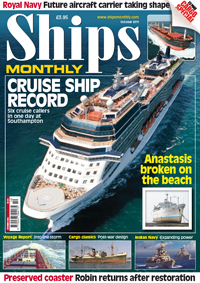 Another feature this month looks at the Indian Navy, which is expanding its operations by developing and constructing a series of new stealth warships using technology from countries around the world. And with the news in last month’s Ships Monthly that China wants a fleet of aircraft carriers and has ambitious naval expansion plans, the contrast with the cuts in the Royal Navy in Britain and, indeed, all the armed forces, being undertaken by the present government, could not be more stark. Consequently, as our Letter of the Month on page 60 suggests, the Royal Navy might have a somewhat bleak future.

However, the RN made the national news in early August for different reasons when the first female commander of a warship was appointed in more than 500 years of the Navy’s history. Lt Commander Sarah West will take command of the Type 23 frigate HMS Portland in April, having shown ‘leadership, confidence, moral courage, sound judgement and excellent people skills’ since joining the service in 1995. We wish her well.