The International Convention for the Safety of Life at Sea (SOLAS) regulations have hit the historic passenger ship fleet hard, and an article in this issue (see page 24) looks at the impact that SOLAS has had on classic liners and old favourites, many of which have now been broken up. The first version of the Convention was passed in 1914 in response to the sinking of the Titanic, and prescribed numbers of lifeboats and other safety procedures that had to be provided on board.

As newer versions of the Regulations subsequently came into force, the rules have become stricter. And as a result, an increasing number of ships have needed expensive alterations and modernisation in order to carry on in service. More often than not, the expense has been too great, leading to the vessel’s demise. 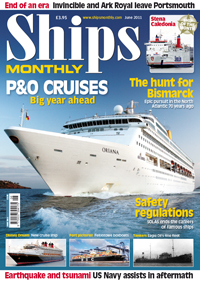 However, those who yearn for the older ships no doubt realise that for modern cruise ship operators it is a question of pragmatism rather than romance. Building a new cruise ship to comply with the regulations is a far more pragmatic proposition than maintaining an old one, despite this running counter to tradition and heritage. Modern ships have all the facilities and amenities to hand, function properly and efficiently and offer a comfortable and enjoyable cruise forthose on board.

Maybe, in a few years, those lamenting the loss of ships regarded as classics will view early 21st century cruise ships in a similar light. And even the correspondents in Ships Mail (see page 60) writing about Oasis and Allure of the Seas being ugly might one day see modern cruise ships as elegant and sophisticated.

As well as old cruise ships being scrapped, many of the Royal Navy’s warships are being phased out as the Strategic Defence Review continues to bite. Invincible and Ark Royal have now left the service, with several frigates currently on their last tour of duty. Many have pointed out the short-sightedness of the policy of cutting the navy so drastically, particularly in light of recent events in Libya. It raises the question whether, in future, the UK will be able to participate in international actions such as that against the Gadaffi regime.