Cunard celebrated the tenth anniversary of the entry into service of their liner Queen Mary 2 with a spectacular event at Southampton on 9 May. Bringing all three Cunard ships together for the day was something of a coup, and Cunard can only be complimented on their eye for generating publicity.

Not only did an evening firework display dazzle the crowds, but bringing the three ships together brought out thousands of people to witness what was a historic event. The days of cruise ship gatherings in Southampton are very much with us, and while some might lament the demise of the more traditional ‘classic’- looking liners, that crowds turn out for these events in such large numbers suggests the level of interest in modern ships is high. 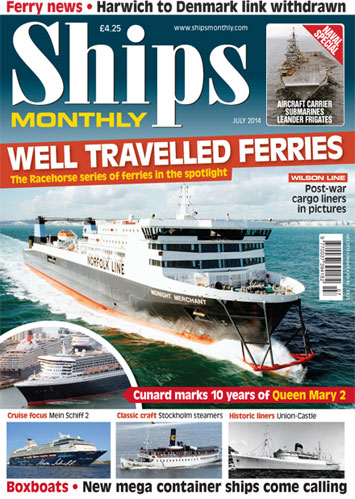 Cunard not only managed to get plenty of publicity for their three ships, with the photoshoots and aerial photos being widely circulated, but they came out with some amazing statistics to support their claims that QM2 is the largest ocean liner afloat today and the only transatlantic liner running between Southampton and New York. For example, she required 40 per cent more steel in her construction than a standard cruise ship.

On a personal note, I remember visiting Queen Mary 2 when she was being built at St Nazaire, and then being privileged to attend the naming ceremony at Southampton on 8 January 2004 when a great fanfare heralded her arrival into service. And, together with her Cunard sisterships, she remains as popular today as ever, with interest in her as great as it was when she was first built