This month we have an excellent article looking at the history of flags of convenience and how they have been used by companies and countries since World War I. Ships flying flags of convenience were widely regarded as being second rate and operated to a poor standard. However, while this may once have been the case, the most popular registries now ensure thattheir ships comply with international standards of safety.

Although international shipping registers are generally thriving as world trade increases and more and larger ships are entering service, Britain’s role in maritime trade may seem to be largely a peripheral one. Indeed, the idea that Britain is still a maritime nation seems not to haveregistered with the British public. Accordingto a recent survey, only one per cent of the population knows that more than 90 per cent of our trade arrives and departs by sea, while seven per cent think that the Merchant Navy is the fishing industry. 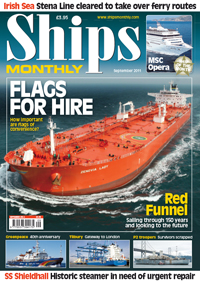 Many people I speak to think that the major seaports with a historical tradition, such as Liverpool and Newcastle, are no longer busy and have fallen into decline, whereas in fact the opposite is true and their throughput is greater than ever. The Port of Tyne has been undertaking a major dredging operation recently and is at its busiest level for years. However, it would seem that bigger ships and faster turnarounds at more efficient ports, which themselves are situated far from population centres, mean that ships and maritime trade have a low profile.

Even a port like Tilbury, which is featured in this issue as this year it celebrates the 125th anniversary of its official opening, has a relatively low profile. As with many ports, public access to Tilbury is impossible, although ships can be seen entering the docks from the other side of the river at Gravesend, and at other ports ships can be seen from public areas. But increased security has resulted in shipping being far less visible and this has clearly had a bearing on the public’s perception of shipping and maritime matters.