Issues surrounding the wrecking of Costa Concordia continue to rumble on, with outcomes that remain far from clear. Passengers who were on the ship when she hit the rocks are taking legal action against Costa Cruises and a lump sum of €11,000 per passenger has been offered in compensation to those on board, but this has been rejected by some passengers, including a group of six who have filed a law suit in the USA demanding £292 million as compensation.

But while the amount of compensation is still to be decided, the effect the disaster may have on the cruise industry in the medium and long term is of more significance. Some reports indicate that cruise bookings are down, while others suggest that the incident will have no impact on the industry. One factor that might come into play is the question of safety procedures on the very largest cruise ships, which carry more than 4,000 people, and whether these are adequate or not. 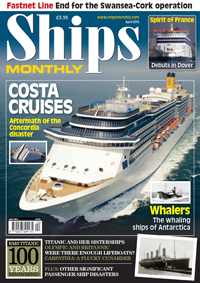 Away from the legal wrangles, decisions are being taken about what to do with Costa Concordia, and it seems the next step will be to refloat her, Costa having confirmed that ten salvage companies have been invited to bid for the contract to be awarded in March. At least 17 people died in the tragic incident, while a further 15 remain unaccounted for.

Another recent incident, which had far less coverage in the national media, involved the sinking of the ferry Rabaul Queen while she was travelling from Kimbe, on the island of New Britain off Papua New Guinea’s east coast, to the coastal city of Lae on the main island. At least 238 survivors were picked up, but as many as 350 people were on board, so exact figures for how many were lost are unknown. This tragedy has happened as we look back at other maritime disasters in one of the articles forming part of the Titanic Special section, which show that these recent incidents are just the latest maritime losses and that in fact ship sinkings are not particularly uncommon.