The withdrawal of the Emergency Towing Vessels (ETVs) that protect the coasts of the United Kingdom has been on the cards for some time, but their actual removal came in September. The establishment of these tugs almost two decades ago was a positive step for sea safety, and their withdrawl has been condemned by many, including shipowners and opposition politicians. Ships Monthly can add its voice to the opposition to what is a short-sighted decision, and one which makes our seas a more dangerous place.

The government defended the decision, arguing that the commercial shipping industry should be responsible for safety and that ‘it is simply not appropriate for the taxpayer to underwrite a responsibility on operators’. However, it will be the taxpayer that picks up the bill for the cost of cleaning up an oil spill when a tanker goes aground in a future incident that could have been avoided had the ETVs been maintained on station. And if the service had been a waste of money, as the government’s position indicates it is, then surely the tugs would not have been set up in the first place. All four of the deepsea tugs will become an integrated part of the tug fleet currently operated out of the Scottish port by J. P. Knight, and it is a sad day for their crews, who have operated them for many years. 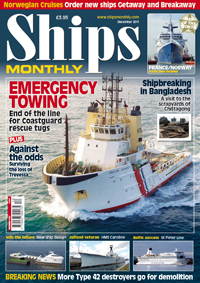 We have a full report on the ETV withdrawal in the Tug news column, as well as a special news report looking into future technology being used on ships. This focusses on some specific ship types being developed by European designers, and which will employ the latest in propulsion methods and environmental technology. Flettner rotors, fishtail propulsion, air hull lubrication systems and biofuel-powered engines are all being considered, and no doubt a wide range of ship types in the future will be fitted with this kind of technology once it has been fully developed and proven to work.