The major investment by Stena Line at Loch Ryan opens a new chapter in North Channel ferry services, and our news pages contain a full report on the considerable changes that have taken place there. Stena are now the dominant player on the Irish Sea, having already taken over the routes out of Birkenhead, under the Stena Line Irish Sea Ferries (SLISF) banner, from DFDS.

I have travelled many times between Stranraer/Cairnryan and Larne/Belfast and have always enjoyed the breathtaking Galloway scenery during the short crossing to Northern Ireland. I am now looking forward to seeing the impressive ships at first hand next year. They represent a notable development of the route as the two new vessels, Stena Superfast VII and Stena Superfast VIII, are the biggest ships ever to sail between Northern Ireland and Scotland, and the high standard of their refits ready for their new role will ensure an excellent passenger experience. 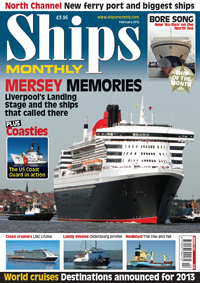 While the opening of the new port will benefit many, not least the passengers, it has left a big hole in Stranraer, which is without a ferry service for the first time in more than 130 years, and local people and politicians have urged the Scottish Government to make sure the town is not left as an ‘industrial wasteland’. Concerns about the future of Stranraer’s waterfront have been expressed, but there are plans to develop the seaside town for the benefit of residents, businesses and visitors.

While the new port and new ships are part of a £200 million investment programme by Stena, one of the largest route investments ever made by the company, elsewhere in the ferry industry a brand-new freight ferry, Bore Song, our ship of the month, has recently entered service and is set to prove an excellent workhorse in the North Sea. However, on a less positive note, the cross-Channel opeator SeaFrance’s future is under threat, and the prospects for its ships are uncertain.