As this issue of Ships Monthly was being prepared, and articles about the 100th anniversary of the sinking of Titanic were being edited, news of Costa Concordia’s tragic accident hit the national news headlines. The modern media was able to use dramatic footage to cover the event, although it was not pointed out that Costa Concordia is the largest passenger ship with passengers aboard to be lost in peacetime since Titanic.It was inevitable that comparisons would be made by the media with the sinking of Titanic, and of the similarities the most notable was that, in both sinkings, human error seems to have been the cause. Both ships were among the most modern of their day, yet even though the Costa ship had the most sophisticated navigation systems on board, these count for nothing when errors are made by those in command. 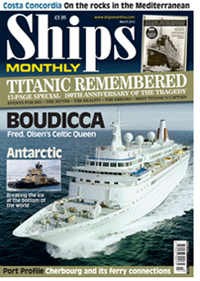 Titanic remains arguably the most famous ship ever built and, in marking the anniversary, we have tried to take a different and original approach to a subject that has been written about, discussed, analysed and mulled over by hundreds, if not thousands, of people. The number of books and articles about the subject has been considerable, and review copies of the books seem to be landing on my desk with great regularity at present. Another incident which we report on, but which received far less coverage, is the rescue of the cargo vessel Federal Miramichi. Although relatively routine, it highlights the British Government’s decision to cease operating rescue tugs in the English Channel. If it had not been for the intervention of the French tug Abeille Liberté, the situation could have been much worse, with a major incident off Guernsey’s coast. The owners of the ship had opted for the commercial tug Hellas to tow the ship, but she did not have the power to carry out the operation in the bad weather. But will the lessons from these various incidents be learned and acted upon?