The unveiling at Poole of the new Shannon class lifeboat on the National Trust’s Studland Beach in September allowed me, and representatives from the national print and broadcast media, a chance to see the new craft in action up close, together with its sophisticated newly-designed launch and recovery rig. And I have to say I was extremely impressed by what I saw of both boat and rig.

The Royal National Lifeboat Institution, which relies entirely on voluntary contributions and whose lifeboats are manned largely by volunteers, has designed the boat in-house, and the new class is seen as the future of the lifeboat service for many years to come. The boat will keep its crew as safe as possible while they go out, often in the worst of weathers, to assist other seafarers and users of the sea. 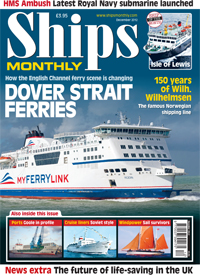 The boat itself represents a completely new concept and design, and she made an extremely impressive sight when I saw her at sea. Apart from the propulsion system which incorporates waterjets, giving considerable manoeuvrability, the other innovative feature is the shape of the hull. It has been designed and built so that higher speeds can be maintained in relatively severe seas without making life too uncomfortable for the crew. And for a relatively small boat this is a considerable achievement, especially when larger ships often slow down in rough seas.

However, what is notable about this is that the funding is all raised through voluntary contributions to the RNLI, and such technology does not come cheap. Two Shannon class lifeboats cost £3 million, while two of the Supacat launch and recovery system rigs add up to a further £2 million. The RNLI has launched an appeal to raise £1.5 million to fund the prototype, and while enough has been raised to fully fund the first Shannon, more is needed. So if any readers of Ships Monthly are keen to help, ways to donate can be found at www.rnli.org.uk.