This month we have a number of reports on happenings in the cruise ship industry, starting with a look back at the origins of Carnival Cruise Lines 40 years ago. As the cliché goes, from humble beginnings come great things, and Carnival Corporation is the dominant player in the modern cruise industry. Carnival, along with Costa, Cunard and others, is just one of 11 cruise ship brands operated by Carnival Corp, whose assets in 2011 totalled a staggering US$38.6 billion.

And it seems that business is still booming for the company, who started out on a small scale before making it big. I recently read that Carnival ships take so much from passengers’ onboard spending that the actual cost of the cruise is more than covered, and this is probably true of most cruising. Clearly the expansion in the industry over the past couple of decades indicates that cruise ship operations are very profitable. 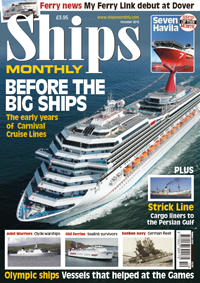 While the cruise business is clearly important to the economies of many countries, so is shipbuilding, and in the short and medium term, cruise companies could further the crisis in European shipyards by reducing their orders, as the report on page 8 explains. As cruise ships have traditionally been built in Europe, the reduction in orders by the main cruise companies is worrying for shipbuilders relying on these. And as Aida Cruises recently ordered two ships from Japan, the crisis in the yards could be about to deepen.

And lastly, as Graham Nicholson discusses in the letters page, the issue of single supplements on board cruise ships remains a thorny one. Many single people who wish to go cruising are undoubtedly put off by the supplement charged for occupying what is usually a double room. Perhaps it is time for cruise companies to design ships with single cabins or set aside cabins for single people.