The 175th anniversary celebrations for P&O were marked with an extraordinary spectacle in the Solent on Tuesday 3 July. Despite the terrible weather, which continues to spoil the summer for ship photographers out and about, the gathering went ahead and proved to be an amazing event and one that, in all probability, will never be repeated. Seven cruise ships, all belonging to one cruise line, passing down the Solent was a unique sight, enjoyed by thousands of people taking advantage of every viewpoint from Mayflower Park in Southampton to Calshot Spit.

We have a special report on the event, which was not only a spectacle for those ashore, but also involved a planning operation that took almost 30,000 embarking and disembarking passengers through the port, and involved use of the local cricket ground that must have been something of a logistical nightmare. And traffic problems in Southampton were compounded by the rain, although this did not dampen the spirits of the crowds. 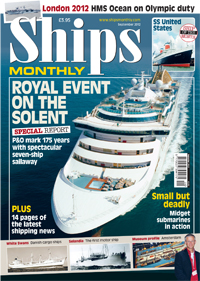 While the P&O gathering generated considerable publicity for the company, as the fleet sailed from Southampton Arcadia was without the Indian restaurant crew who were serving British passengers this time last year. As reported in the national media, their contracts had not been renewed after they protested in 2011 about their falling earnings.

With basic wages of as little as 75p an hour, tips make up the bulk of earnings for many such employees, and as these have been gradually diminishing, so many workers are being affected. Cruise companies employ people from round the world and, according to the RMT Union, have ways of getting past the employment legislation of countries to which the ships belong. But maybe all staff should be valued as much as the ships, and their work rewarded accordingly.