This month’s Ship of the Month feature looks at the giant 170,000gt Maersk container ships, with a focus on Evelyn Maersk, the fourth of the class. I was fortunate to spend an afternoon on board her when she was in Felixstowe earlier in the year, and was shown round most areas of the vessel by Captain Flemming Kjaer and Chief Engineer Per Schilling Nielsen. Among many mind-boggling facts and figures about the ship, the size of the propeller shaft stood out. At about 100m long, it is so heavy that additional electric motors are needed to turn it as the 14-cylinder diesel engine, despite being the most powerful on any ship, cannot quite do the job. The level of automation is another notable aspect of the ship, with relatively few crew needed because of the high degree of computerisation of many of the operations.

It is difficult to appreciate the sheer size of the Maersk container ships, as well as the container operations at the Port of Felixstowe, from a distance. But seeing the port at first hand, and being shown over the ship, I realised that the scale of operations was truly incredible. The cranes loading the ship towered above the quayside, and a steady stream of ‘tugs’ brought containers for loading onto the main area 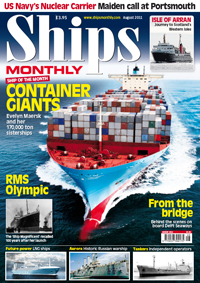 s of the ship, making up row upon row of containers. The accommodation block in the centre of the ship is enormous, with the engine room and controls at the bottom and the bridge at the top. In between are all the crew facilities, including mess rooms, laundry, computer rooms and cabins.

On a historical note, I was in Belfast recently when the 100th anniversary celebrations marking the launch of Titanic from Harland & Wolff were taking place. The city is gearing itself up for the anniversary of the tragedy next year, and buildings in the Titanic Quarter are beginning to take shape. The centrepiece is an interactive visitor centre, which is due to open in 2012 and is part of an enormous investment in the city. After years of largely ignoring its Titanic heritage, Belfast is waking up to the tourist opportunities that the famous ship offers and is ready to exploit those in time for next year.