Preserving old ships is a difficult, expensive and time-consuming business, and Ships Monthly has in the past reported on many projects to save historic vessels around the world. Judging whether a particular vessel is worthy of the time and expense to safeguard it for future generations is not always straightforward, but the recent plea for support from the Southampton-based steamer Shieldhall deserves to be highlighted because the vessel is already in working condition and the prospects for her future should thereforebe good.

In order to keep Shieldhall in working order, she must be dry-docked every two years, but the finance for this process is not readily available, hence the plea for support. Unfortunately, factors such as a rise in fuel costs and cuts in heritage grants do not bode well for preserved ships. And while enthusiastic and committed volunteers are ready put in both time and effort to keep many of our historic vessels going, finance is the key to maintaining our maritime heritage. 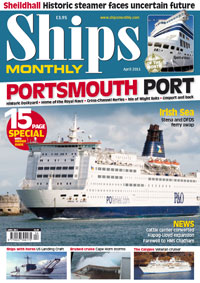 On a recent visit to Essex, I came across a historic vessel, High Speed Launch 145, now named Nanaloa, which is lying derelict in a mud berth at West Mersea and could be completely destroyed in a bad storm. Built in 1939, she was one of the first batch of boats known as ‘whalebacks’ from their distinctive humped superstructure. For many years she was owned privately and used as a pleasure cruiser, but a decade of neglect has caused her dramatic decline.

It is important that we preserve as much of our maritime heritage as we realistically can, and so Shieldhall should have a rosy future, as she is at least an operational vessel in good condition. However, as grants are no longer as forthcoming as they once were to fund restoration and maintenance work on historic ships, our seafaring nation could be at risk of losing many of its most significant vessels.