Before reflecting on the latest shipping matters, I would like to introduce myself as the new Editor of Ships Monthly. Having already worked on the magazine for more than ten years, I now find myself in the privileged position of taking the helm on the UK’s best selling shipping magazine, and one that has a worldwide following.

I know how knowledgeable you, the readers, are, how much you enjoy the magazine and how important it is to maintain the high standards you have come to expect from Ships Monthly. So I hope you will approve of the few changes we have made with this issue, refreshing the magazine’s layout and strengthening its content.

This month we are featuring some of the biggest ships ever built, begging the question does size matter? Well, in terms of shipping it seems that it does, as ships get bigger and bigger, stretching the limits of both ports and what is technologically possible. 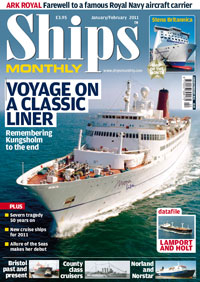 The massive cruise ship Allure of the Seas, with its incredible 5,400-passenger capacity, was launched recently and made her debut in America, joining sistership Oasis of the Seas on year-round Caribbean service. Meanwhile back in the UK, Stena are now operating what they claim are the biggest ferries in the world, sisterships Stena Britannica and Stena Hollanidca, and the former is our ship of the month. But will we see cruise ships and ferries getting any bigger than these mega ships?

Inevitably, the focus is on the new ships that are making their debuts, but many will want to remember classic liners, such as Kungsholm, now Mona Lisa, which is featured this month. And she is just one of a number of old cruise ships leaving service and being broken up, with the list of old cruise ships ending their days, found on page 9, making nostalgic reading.

As ever, your letters and contributions are always welcome, and I hope that everybody will enjoy this first issue of 2011 which ushers in a new era for the magazine.