This year is the 100th anniversary of one of the worst maritime disasters ever, which occurred when the Canadian Pacific liner Empress of Ireland sank in the St Lawrence River following a collision with the Norwegian collier Storstad in the early hours of 29 May 1914. Of the 1,477 persons on board the ship, 1,012 died, making this the worst Canadian maritime accident in peacetime.

What is notable about the incident is the relative lack of recognition that it has received. Although the number of lives lost was almost as many as in the sinking of Titanic, the publicity for the Empress tragedy was and is negligible compared to that of the White Star liner. 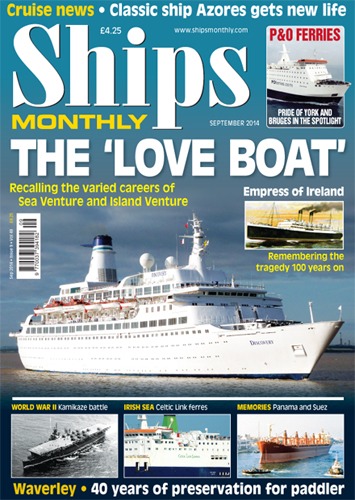 However, I hope that the interesting article in this issue helps redress the balance.

In the same way that Titanic, and the outbreak of War in 1914, overshadowed the tragic events in the St Lawrence River, so the search for the missing airline MH370 and other world events largely overshadowed the tragedy off South Korea on 16 April, when the Japanese-built South Korean ferry Sewol (6,900gt) capsized while carrying 476 people, mostly secondary school students.

Despite modern navigation aids and safety features on ships, it seems human error – as with the Empress – cannot be eliminated. The blame for the sinking of Empress was attributed in some quarters to Captain Henry Kendall, while the South Korean tragedy has had far more serious outcomes, with criticisms levelled at the ferry’s captain and crew, some of whom were charged with murder. And it is difficult to take anything positive from this.