Andrew Cooke talks to Captain Nick Roberts, master of P&O Ferries’ 26,433gt Pride of Calais, about his career at sea and his ship, which was introduced on the Dover-Calais route in 1987 and is soon due to be replaced by the new Spirit of France.

When did you first go to sea and on which ship? I joined the 35,000gt Shell tanker Varicella on 23 April 1972 in Balboa at the southern end of the Panama Canal. She was then employed carrying white oils, chiefly aviation fuel, from Venezuela/Netherlands Antilles tovarious US ports.

How has your career developed over the years? After seven years with Shell Tankers, I spent 11 years with Offshore Marine/Zapata Marine on their anchor-handling/supply/dive support vessels, gaining my first command in 1988. After a brief spell ashore, I joined P&O Ferries as Second Officer in 1990. I have sailed in command since 2002 and gained the substantive rank of Master in 2009.

How did you come to work for P&O Ferries? By the end of 1989 I had had enough of working away from home and when P&O advertised for deck officers I had no hesitation in applying, as it meant being able to combine a job at sea with a home life. In those days it was shift work and this meant I moved down to East Kent.

Of the ships that you have served on, do you have a particular favourite other than perhaps your current vessel? Varicella was my first ship and also my last as a cadet. During my second tour on board her, Shell was diversifying from oil and gas transportation into other cargoes, such as grain and coal. As a white oiler, her tanks had protective coatings, which made her particularly suited for the carriage of grain, carrying cargoes from US East coast/gulf ports to the Mediterranean.

Describe an average working day on the Dover-Calais service in terms of the routine operations/duties? We have a busy schedule, as the ship makes five return crossings every 24 hours. We have two complete crews living on board, each working a 12-hour shift. Aside from my time spent on the bridge, the rest of my shift is taken up with a mix of administrative duties ensuring compliance with state, flag and company requirements. 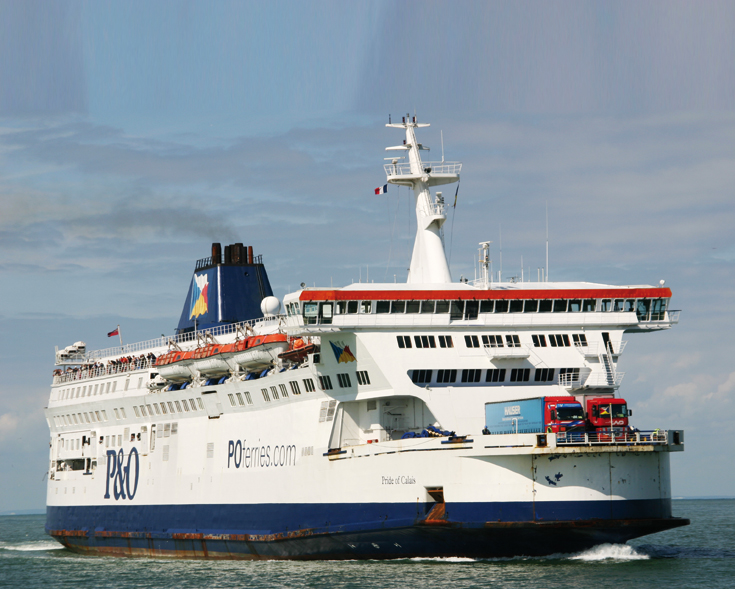 How many crew members work on board with you and what are their roles? Between 80 and 100 crew work on the ship, with the exact number determined by our projected passenger numbers. They are broken down into deck, technical and onboard services departments.

What kind of special knowledge do you need for working on this ship and the route that she covers? Pilotage exemption certificates for Dover and Calais and local knowledge of both ports are needed. Other than that, the ability to think on one’s feet is crucial, as every day can throw up something different when you are carrying up to 2,000 passengers across the world’s busiest shipping lane.

What is the most useful innovation that you have seen introduced during your work at sea? I think back to the hours spent on a bridge-wing clutching a sextant, fixing the ship’s position by taking celestial sights. How much easier the Navigator’s lot has become with the advance of radio navigation systems over the years, culminating in today’s satellite navigation systems giving positions accurate to within a few metres.

How do you see your career developing from here? I envisage completing my seagoing career on the Dover/Calais service. I have two teenage daughters, who both hope to become medics, and I am planning my retirement date to coincide with my youngest completing her studies.

How do you spend your leisure time?I enjoy golf, cycling and DIY, if thelast can be classed as a leisureactivity