Captain Paul Sellers, master of Irish Ferries’ chartered ro-pax Epsilon, talks to Jehan Ashmore about his career and the role of the Italian-flagged ferry Epsilon, which operates two routes: Dublin to Holyhead and, at weekends, a roundtrip between the Irish capital and France. Launched in early 2014, this 19-hour service augments Irish Ferries’ ferry Oscar Wilde, which operates on the more established Rosslare-Cherbourg route and the seasonal-only service to Roscoff.

Do you come from a seafaring background, and what inspired you to take up such a career?I have an older brother who is at sea, and my father was also briefly in the industry. My brother went to sea when I was in my early teens and I am sure he influenced my decision and direction.

When and where did you first go to sea professionally?My cadetship was with Blue Star Ship Management Ltd, who managed Blue Star Line, Lamport and Holt and Booth Line, whose ships were reefers, container, general cargo and heavy-lift vessels. The first ship I joined was Ulster Star in Southampton in February 1978, and we sailed for South America. My first port of call was Rio de Janeiro, which was exciting, but imagine my disappointment when the Chief Mate said I was not allowed ashore. I was rewarded with the delights of Santos the next day, which was quite an eyeopener for an innocent lad from York. 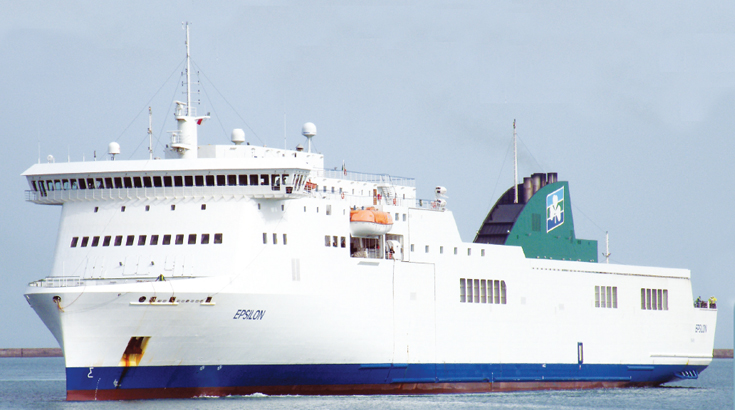 Do you have any favourite types of ships on which you have served?There was a variety of classes of ships I served on, predominately reefers, passenger vessels, general cargo ships, an accommodation vessel in Port Stanley and briefly a salvage tug in the Falklands. My favourite would be RMS St Helena, on which I was Chief Officer for two years. I have very happy memories of the diverse ports we visited and the interesting passengers who travelled with us. My family travelled a few times with me, and my wife and daughter spent one summer holiday flying to South Africa to meet the ship and returning to the UK via St Helena,

Ascension and the Canaries to Cardiff. Epsilon operates two different routes, so what structures are in place to maintain schedules?The Dublin-Holyhead trade is more intense and is a 24-hour operation requiring two crews doing a 12-hour duty on then 12 hours off. The crossing time is three and a half hours, so more time is spent on the bridge in pilotage waters and berthing. The France run takes 19 hours and could be undertaken with a single crew, which provides an opportunity to catch up with maintenance and admin.