Captain Pedro Montes Pinto, master of Athena, talks to Byron Clayton about his career, the ship he now commands, and her past and future.

How has your sea-faring career developed?I went to the Portuguese navy academy in 1988 and after three years decided to switch to the nautical school for the merchant marine, finishing there in 1994. After graduating, I started working on cargo ships as a chief officer. I worked on ro-ro, container ships and general cargo ships before moving to passenger liners. I took my masters licence in 2003 and was promoted to Captain in 2009. Athena was my first command.

How did you start with Classic International, and with which ships?I came to Classic in 1999 and started on the 1955-built PrincessDanae as 2nd Officer before moving to the 1961-built Funchal. I subsequently progressed to Safety Officer andthen StaffCaptain.

How would you describe an average day for you aboard Athena?I am always on duty, and I love the job. A ship’s master never really sleeps – they just rest. For example, coming into Singapore this morning, I was up at 0300. We will depart at 1600 and then I will have additional Captain’s duties with the passengers. It will be a long day, but I find it very satisfying. Working here is like being with my family. The owners of the line care for the people that work on board as well as the passengers. They feel as if they are part of the Athena family and we have at least 60 per cent repeat passengers on most voyages. We are small enough that we can have direct contact with the owners on a regular basis, and not many cruise companiescan say that. Usually my schedule is to stay on the ship for fourmonths with two months off, butthis varies depending on the length of theseason.

As Captain of the oldest passenger ship in active operation, do you feel a special relationship with the ship?Athena is very special to me as it was the first ship on which I was Captain. For me, this is an opportunity to sail in a real classic. Most passengers are aware of the ship’s history as Stockholm and her encounter with Andrea Doria, especially when we go to Sweden. We are often featured in newspapers, and lots of people come out to see the ship. It is a really famous ship. People want to ask about the accident and get my opinion on what happened. Of course, that was the past and is very interesting history, butwe arebasically a new ship now with anew company. 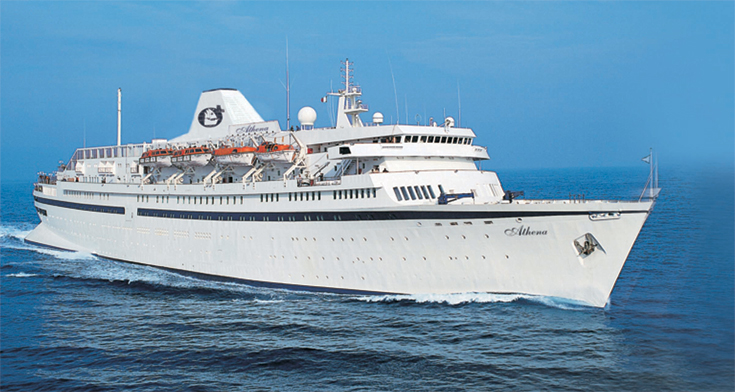 In 1994 the ship went through amassive renovation which sawalmost everything replaced,including the engines. Other than the hull, what remains from her original daysas Stockholm?The outer hull and the rivets are about all that is left. The ship was completely rebuilt in 1994. The superstructure was also increased in size and, due to the shape of the original hull, the duck tail was required to increase stability. As a result there is an increase in speed and better fuel consumption. She isactually filled with solid ballast. Depending on the course, we canhave autonomy for up to 12 dayswith a normal cruising speed of16knots.

What is your favourite place on the ship and why?The bridge. The wind on my face while on the bridge wing and being able to use my skills and technical abilities to manoeuvre this ship is a wonderfulfeeling.

Where do you like sailing?I like sailing in the Asian Pacific where, for example in Singapore, everything runs on time and is very well-structured. Asia is rich in cultural diversity and is very different from what I have experienced in Europe. I also love Northern Europe, especially the Baltic capitals, which have so much history. I also love Australia, the nature, the wilderness and especially the friendliness of the people there.