The cruise ship AIDAbella is the second of the Sphinx class series of ships built by Jos Meyer at Papenburg, for the German Cruise line AIDA. Her master, Captain Przemyslaw Kurc, talked to Alan Moorhouse about his career, the ship, and current issues in the cruise industry during a brief stay at Hamburg.

How did you become interested in a career at sea?I have no family tradition of seafaring. My father was an economist in my home city of Poznan, in central Poland. Following my education in Poznan, I chose a career at sea after reading an interesting article on Baltic Navigation in the Polish shipping publication Sea News. I joined the merchant navy and went to the Maritime University at Szczecin (SMU), where I gained a Nautical Engineering qualification. Students were required to spend one day a week with Polish Ocean Lines. I also spent further time officer training at the Gdynia Maritime Academy (GMU).

How did your early career develop?I joined Polish Ocean Lines full time in 1981 as a Deck Assistant and moved up to Third Officer and Second Officer. My first ship was Krakow, a general cargo ship of 5,300 tons built in 1965. I served on other POL general cargo vessels including Rzeszow (1965/5,320gt), Syrenka (1961/1,356gt), and Naleczow (1969/2,063gt). I spent time aboard reefers, including Dzieki Polskie (1978/3,890gt), and on container ships including the 1986-built Krakow II (13,893gt). Following a period on reefer ships with Polipec International Lines from 1988 to 1990, I moved to DFO (Deutsche Fährgesellschaft Ostsee), who operated the ferry between Trelleborg in Sweden and Rostock and Sassnitz in Germany.

On which ships have you been Master?My first ship as Captain was Rostock, a 13,700gt ferry built at Verksted in Norway. I also was Master aboard Rugen (1972/12,200gt), and Sassnitz (1989/21,100gt). I then moved to the newly-built train and vehicle ferry Mecklenberg-Vorpommern (36,185gt). I was involved in the crew training, initial testing, and sea trials on the ship through to delivery in 1996. I continued working for DFO when they became Scandlines in 1998. The expansion and development of Aida Cruises brought a requirement for experienced officers and I joined Aida in 2002. I have since been Master aboard AIDAcara, AIDAvita, AIDAblu and AIDAaura. I currently alternate between AIDAbella and AIDAdiva. 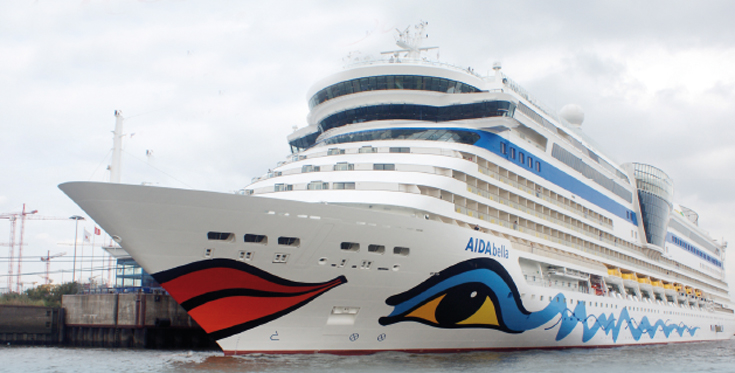 What have been the most memorable and most difficult experiences during your career?My most memorable moment was being in charge of the first arrival of AIDAdiva in Hamburg from the builders at Papenburg on 20 April 2007 for the naming ceremony. There was a spectacular firework, lights, sound and laser display in the river Elbe. The deliveries of the later ships have been just as exciting. I am looking forward to the delivery of AIDAmar, which will be named in Hamburg in 2012 with a number of Sphinx class sister ships in attendance. As for my most difficult moment, I have been quite fortunate. It has been nothing more than a fire alarm caused by cooking breakfast onthe bridge.

What do you do in your free time?I spend time ashore at my home in Munich, and I enjoy the outstanding scenery, fresh mountain air, and the food in nearby Austria. I like to relax with my family.

How do you see your future progressing?I am very much involved with bridge management and staff training. There are simulator facilities in Stockholm for the training of ships’ officers and engineers. There is also training on working with staff, including communication, delegation, motivation, preparation for crisis management and cultural awareness. The latter is particularly important when there is such a diversity of staff on cruise ships, with crew from 26 different nationalities aboard AIDAbella. I have trained and mentored three current staff captains, and a fourth is soon to be promoted. Training is particularly important as the AIDA fleet goes through its current expansion programme.