Steve Newman talks to Captain Torbjörn Svensson, master of the small 1992-built cruise ship Island Sky, which was refurbished in 2006. She was operated by Zegrahm Expeditions,serving the boutique eco-adventure cruising sector, currently the biggest growth area in the industry.

Do you come from a seafaringbackground?My father was an artist and writer who loved islands and the sea. As a family we sailed around the Stockholm Archipelago on folk boats and undoubtedly I inherited my father’s love of the sea. When, at the age of 17, I got bored with school, a career at sea came naturally.

Where did you train?I trained at Stockholm Nautical College and left with my Master Mariner certificate, graduating as a deck officer in 1974. I became a Master Mariner Captain aged just 22.

How did your early career develop?I first went to sea professionally as a deck boy for Johnson line and the Broström company, in the domestic shipping service in the archipelago. After College I worked on reefer ships for a time, then had the idea of cruising. As a young man I bought an old 40m steamer, Saltsjön, which could carry 300 passengers. From small beginnings, I became a self-employed captain and shipowner. Iinitiated the rebuilding of the small expedition ship Lindblad Polaris and my company also operated Lindblad Explorer. My last ship before Island Sky was Clipper Adventurer, which Ileft in 2009.

What is this ship like to serve on?Very nice! We have 71 crew, who are mostly Filipino seamen, as well as the expedition staff who work with the 100 guests. The crew work usually on seven- to eight-month contracts, while senior staff work two and a half months on and off. My first officer is Swedish and my chief engineer is Ukrainian, while both the cruise director and hotel manager are South African. I brought both engineers from my previous ship with me. I simply love expedition cruising, especially the interaction between the nautical and hotel elements. It’s fair to say I would never go back to cargo ships. 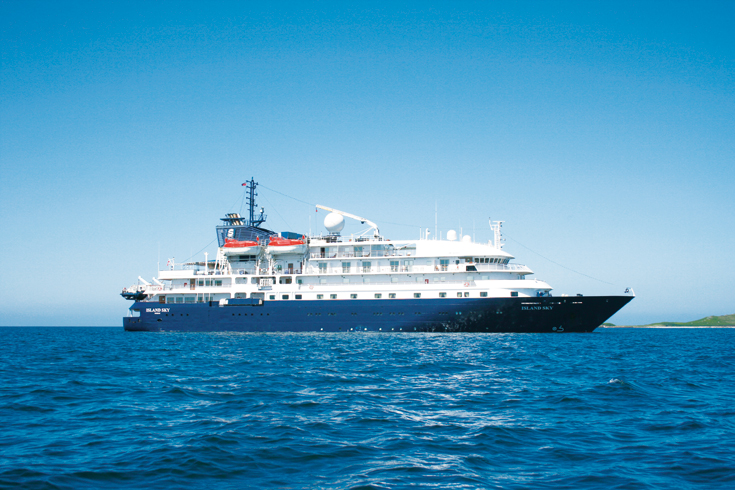 What specialist knowledge do you need for working on thisship?You need the flexibility to be one step ahead of the guests. I tell all my crew that we do not have passengers on board, but guests. I try to instil this in everyone, from the hotel staff to the engineers. In the expedition cruise sector you need to be not just an excellent seaman, but also a diplomat and an entertainer. We have an open bridge policy during daylight hours, and when not involved in manoeuvring I can be talking to passengers one minute and involved in docking or leaving port the next.

How does poor weather affect you?We reroute to avoid bad weather, and so I often have to think on my feet. Sometimes we have to say to the guests, sorry, but you can’t go to A, but we have B, which you will find just as, if not more, interesting. Expedition cruising is all about getting the guests ashore in zodiacs, and if we have to overcome bad conditions to get to somewhere like St Kilda, but when we get there we can’t land, there is no point in going. Sometimes when we reach a destination the swell has become too big to safely launch the zodiacs.

What has been your most difficult experience at sea?Without doubt, sailing in Antarctica can be a challenge if you’re not careful. There is a considerable pressure on you with the rapid changes of weather, and you really have to adjust quickly. It’s very ‘interesting’, but I would not like to do a full season down there.

What is the most useful innovation you have seen introduced in your time at sea?Communications and items such as GPS and AIS. We do carry a sextant, but recent technological advances have been phenomenal. The fact that I can pick up a telephone, find our exact position or talk to anyone anywhere in the world is very useful. These advances have made shipping much safer in recent years.