Scott M. Davis, Master of the cargo vessel Pennsylvania, talks about his career, his ship and working for the ship’s owner Crowley Petroleum Services.

When did you start your career?I started my seagoing career in 1999 after I graduated from the Maine Maritime Academy.

What was the first ship you served on?The first ship I ever worked on was Coastal Eagle Point, a vessel in the US Jones Act trade. The Jones Act requires all commercial vessels that transport domestic cargoes between ports in the United States to be built, owned, operated and manned by US citizens and to be registered under the US flag. Crowley owns and operates more than 200 Jones Act vessels for a wide variety of customers.

How did your career progress?My first seagoing job was as an able-bodied seaman. Soon after, I was promoted to third mate and began to make my way up the ranks. All it takes is time, patience and a lot of hard work, but the results are worthwhile.

What was your first command?My first command was on the tanker Blue Ridge, a now-retired, US-flagged, Crowley-operated cargo vessel that was employed to transport petroleum products in US coastwise trades. 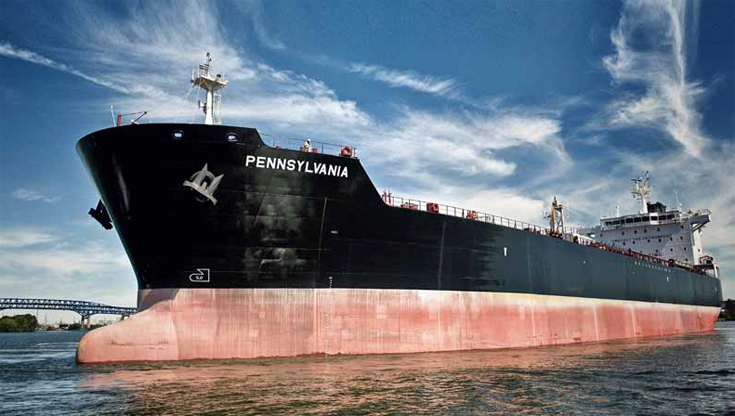 What are your day-to-day routines on board this ship? A normal day at work is quite intensive, as Pennsylvania operates under the Jones Act Trade. We are always transiting in and out of port, so much of my time is spent on the bridge assisting the mates on watch as well as the pilots. At sea we perform preventative maintenance on the vessel’s cargo systems, fire-fighting and life-saving equipment, and the machinery plant. The administrative duties are of the utmost importance as well. We need to keep the company office as well as our charterer informed of our vessel movements and on the status of operation.

How many crew are needed, and what kind of shifts do they work?At present we have a crew of 24 people, although the crew usually numbers 21. The crew works shifts around the clock, as we are a 24-hour operation. Safety is the top priority for us and we incorporate a safety-conscious mentality into each shift.

In your career, have you served on any ships that stand out and are particularly memorable? The most memorable ship on which I have worked was Blue Ridge, because she was my first command. The vessel also had an excellent crew and they embodied Crowley’s core values.

Since your career started, what are the most significant advances in ship design and equipment that you have seen?Some of the most significant advances have been with the Navigation Equipment. It has advanced rapidly and is beneficial to the safe navigation of the vessel. Crowley’s vessels have some of the most technologically advanced vessels in the industry, including many equipped with DP1 and DP2 systems, so I have had the opportunity to see the navigational advances at first hand.