DFDS has recently taken over and renamed the three Norfolkline ships on the Dover-Dunkirk route. Steven Cockerill, master of Delft Seaways, talked to Nicholas Leach about his career, the ro-pax ferry he commands, and whether the change of owners has affected operations.

When did you first go to sea? And with whom?I first went to sea aged about five with my father on his boat working from Bridlington in East Yorkshire. He was a fisherman taking angling parties out in the summer and fishing commercially in the winter. I suffered with seasickness and would be sick within minutes of leaving harbour, but I was determined to beat it. And when I was 15 I seemed to win, and have never been seasick again.

What other ships have you served on? I started as a deck cadet with Furness Withy in 1979 on general cargo vessels, a products tanker and gas tankers until I gained my first certificate in 1983. I then applied to over 100 companies for work and eventually took a position as mate on an old coaster, before getting a second officer’s job with the dredging company ARC Marine in 1984. During summer 1984 I worked as a deck hand on an inshore trawler covering for an injured fisherman, but stayed in the inshore fishing industry for five years. In 1989 I secured a Second Officer’s position with Lowline Ltd and worked mainly in the offshore sector on supply vessels Lowland Prowler and Lowland Pioneer, although I also served on Lowland Lancer (ex-RFA Sir Lancelot), which had been converted to a ferry working from Weymouth. In 1991 I went to work for Maersk as Second Officer on their Husky and CH class vessels. Promotion to Chief Officer on AHTS Maersk Shipper came in 1994 and I got my first command, the AHTS Maersk Chancellor, in November 1999.

When did you first work on ferries?In March 2006 I was offered the opportunity to transfer to Norfolkline ferries and took command of the newbuild Maersk Dover in June 2006 at the Samsung yard in Geoje, Korea. Maersk Dover started on the Dover-Dunkirk route in July of 2006 before the change of owner to DFDS in 2010, when she was renamed Dover Seaways. My latest ship is Delft Seaways.

What is the most useful innovation you have seen?Without doubt the GPS system. It is integrated into so much bridge equipmentand is largely taken for granted now. It is used by nearly all sea-going vessels, from the smallest to the largest, and it would now be difficult to imagine life without it. 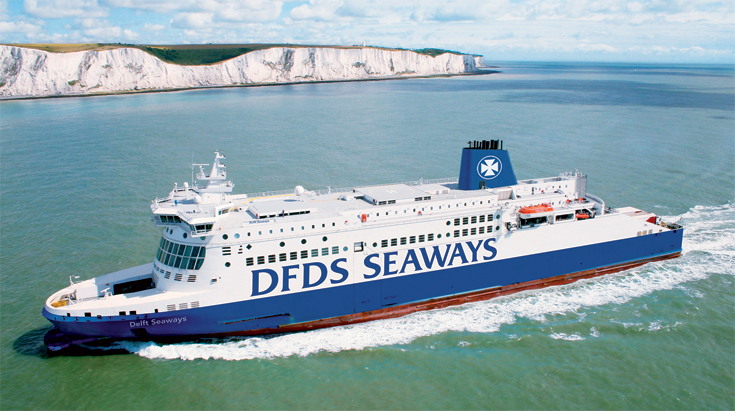 How did you come to choose a career at sea?I don’t know if I chose a career at sea, or it chose me. When I was going to sea with my father as a boy we would discuss the ships passing Flamborough Head and where they could be going. I told my father that I would not mind going to see these places and he said, ‘If you are going to do it, you are going to do it right’. And with that I found myself attending the Hull Trinity House Navigation School aged 13. At 16 I had the necessary O levels to gain a cadetship with Furness Withy.

What is your favourite ship which brings back good memories? Also least favourite?My favourite ship was Maersk Shipper, the AHTS ship that I was appointed to when I was first promoted to Chief Officer. There was an excellent team spirit on that ship, everyone got on well together and there were talented people in all ranks. My least favourite was the coaster Rolston, which had seen better days, and I remember bailing water from the wheelhouse in poor weather while on passage from Rotterdam to Hull.

Can you describe a standard day on board this ship?Because of the trading area, the traffic density, number of crossings (50 per week) and associated port movements, the three ships operate with a Master on duty at all times. That means that there are two Masters onboard working a 12 hour on/off shift pattern. We work a week of nights followed by a week of days, two weeks on, two weeks off. The benefit to having two Masters on board is that you can sign command of the ship over after your 12-hour watch and relax knowing you will not be called unless it is for an emergency. There are also two Chief Engineers working the same watch pattern. There are usually 70 crew on board for a passenger ship safety certificate for 1,000 persons.

How does poor weather affect your operations?These ships have a relatively large windage area but are well equipped to deal with it. There are four 9,600kW main engines driving two CPP propellers, three 1,800kW bow thrusters, one 1,800kW stern thruster and twin Becker rudders. High winds obviously slow port movements as we have to take greater care, and on occasions we may require tug assistance.

Have you ever been involved in any unusual or dangerous or difficult incidents?The UT704 Lowland Raider was a relatively poorly-equipped anchor handler for working the northern part of the North Sea. We were chartered to act as a standby tug while the lead tug Kronbas towed the semi-submersible rig Hunter from Teesside to the Magnus field. The tow started in ideal conditions, but the wind freshened steadily to storm force ten. When Kronbas parted the tow line, we spent the next few days chasing the rig while waiting for the weather to improve enough to connect an emergency tow wire. We eventually connected a tow line 180 miles north of the Magnus field, just 60 miles from the Norwegian coast. The wind eased to a force eight before we made the successful attempt to connect the tow using pelican hooks.