P&O Cruises made history in Sydney Harbour on 25 November 2015 with a spectacular five-ship parade  to celebrate the arrival of its latest two cruise ships.

In a world first, the cruise line marked the debut of Pacific Aria and Pacific Eden with a social media naming ceremony, which saw Australian singer Jessica Mauboy and actress Kate Ritchie simultaneously christen the ships via Twitter as the two vessels sailed either side of Fort Denison.

Champagne was smashed on the bow of each ship as they reached Fort Denison, with all five ships sounding their whistles to mark the nation’s first dual cruise ship christening.

The unique gathering of five cruise ships from one fleet on the Harbour was watched by thousands of Sydneysiders on the foreshore and on small boats, while more than 12,000 guests and crew onboard the P&O fleet joined in the celebrations.

The five ships remained on Sydney Harbour all day, with guests enjoying a series of live concerts from more than 25 music acts during the afternoon and evening. 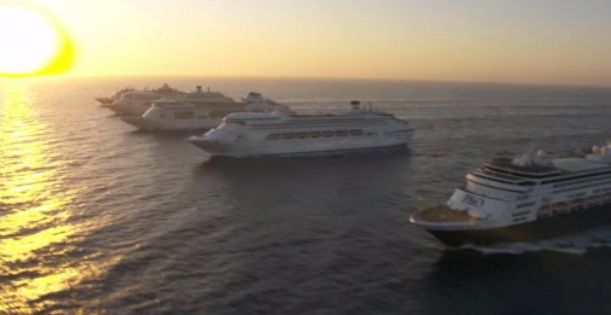