The largest cargo ship ever to call at Portsmouth International Port arrived on 20 January 2016. Maersk’s Antwerp Trader, 211m long, arrived from Colombia with a cargo of bananas.

The arrival of the container ship at Albert Johnson Quay marked a change in business for MMD Ltd, the Port owned fruit import specialists.

Previously cargo on the route from Central America had been carried on traditional reefer vessels, largely transported on pallets. However, Fyffes has decided to use larger ships from now on, with all the bananas being kept in containers.

Staff at MMD unloaded the hundreds of containers full of fruit when the vessel arrived. Portsmouth International Port was the first port of call for Antwerp Trader on her journey from Colombia.

She then headed off to Antwerp and Rotterdam. This also marked a major change. In the past reefer vessels carrying Fyffes bananas would have called at Antwerp first before sailing onto Portsmouth.

This was the first of a new weekly service operated by Maersk Line, the world’s largest shipping company, and a move made possible by a recent £5 million pound investment in the Port’s future.

Recent work to demolish the “Floating Dock Jetty” means Maersk Line can bring its vessels to Portsmouth, with easier navigation within the Port.

The Port Manager, Martin Putman, was waiting to greet the vessel when it arrived at around six in the evening. A new container handler has been purchased to unload the cargo, new investment that Martin believes is safeguarding the future of the Port. 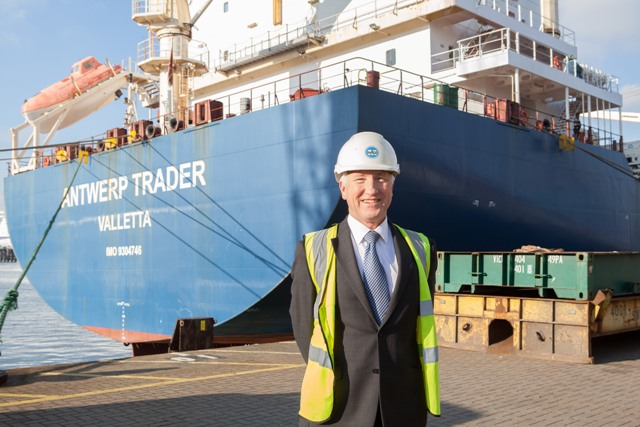