What a contrast there was in Southampton in January as the last British-built cruise ship took her curtain call and the latest mega cruise ship steamed into port a few days later. It was a fond farewell for Saga Ruby as she left Southampton for the last time on 10 January, and a warm welcome for Norwegian Getaway.

Saga Ruby was built on the Tyne by Swan Hunter in 1972 as Vistafjord, becoming Caronia in 1999. She took her current name, Saga Ruby, in 2004 when acquired by Saga Cruises, and became something of a favourite. But the 40-year-old ship has now retired from service and is to become a floating hotel in Singapore. 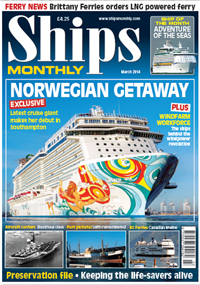 Saga Ruby measured 24,292grt and could carry a maximum of 670 passengers – impressive figures for the 1970s. But she is totally dwarfed by the massive new Getaway which, at 145,655gt, is almost six times as big in terms of gross tonnage and, at 325.7m in length, almost twice as long.

These stark differences reflect the changes in the cruise business in the four decades that separate the building of these ships. No longer is the destination what matters – now the ship itself is the destination, and passengers on Norwegian Getaway need never leave what is in effect a resort. They have everything to hand for their comfort and entertainment.

Norwegian Getaway provides everything that is expected from a modern cruise ship in terms of facilities and accommodation and more, but it is unlikely she will match the notable longevity achieved by Vistafjord/Saga Ruby. And as Gateway prepares for a Miami career, Saga Ruby goes into retirement and brings to an end the era of British-built cruise ships.