This issue of Ships Monthly, the first of 2013, has an international flavour, with articles covering ships and shipping around the world. While we usually focus on maritime matters closer to home, this time our well-informed authors look at ships further afield. We have features on the lesser-known ferries of Japan, a voyage to South America in the days before containerisation dominated, a look at the busy port of Singapore, and the US Navy. We go to Norway to take in the Hurtigruten ship Finnmarken, move to Denmark to profile the historic liner Jutlandia, and on to Rotterdam for World Port Days.

Despite Rotterdam being generally regarded as Europe’s biggest port, closer to home the port of Liverpool has just been awarded the title Port Authority of the Year at the global Containerisation International Awards. The Port beat entries from many other ports, including Los Angeles, Antwerp and Charleston. This award is significant and it is hoped that the port’s profile will be raised as a result. Many people I have spoken to believe that the Mersey in general and Liverpool port in particular is no longer as busy as it was in the heyday of the cargo liner, but nothing could be further from the truth. As with many ports, as ships get bigger, so facilities move to deeper water, and away from their original location.

Most people, including many in Liverpool, will have no idea how busy and important the port is because it is fenced off away from the city centre. Yet one large container ship calling in Liverpool can carry five times as much cargo as a traditional cargo vessel, unload considerably faster and be operated by fewer crew and shoreside personnel. And when Liverpool2, the port’s new deep-water container terminal, opens in 2015 it will bring some of the world’s largest container ships to the Mersey. But will anyone actually see them? 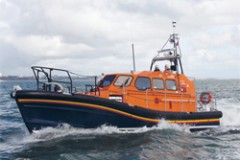 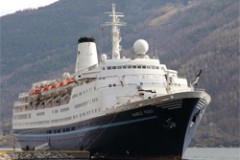