In the last issue of Ships Monthly, Iwrote about the grounding of Costa Concordia and the effect the incident might have on the cruise industry as a whole. But however the industry reacts to the highly-publicised incident, Costa’s parent company Carnival have hit difficult times. In early March the company, the world’s largest cruise line, announced that its 2012 earnings were down 82 per cent, and posted a $139 million first-quarter loss compared with a net income of $152 million a year earlier.

The company was not helped by the breakdown of Costa Allegra, which we report on in Waterfront news and which received much attention in the national media at the time. Whether these Costa incidents have a long-term impact on cruise bookings around the world remains to be seen and, although Costa itself may be adversely affected, it is unlikely that the industry as a whole will suffer. 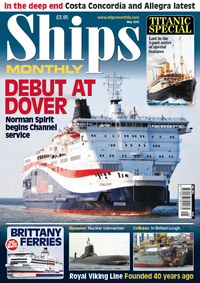 This may be due, in part, to the massive publicity being given to the 100th anniversary of Titanic. Those cruise ships that are taking passengers to the site of the sinking for the day of the anniversary were fully booked as soon as the cruises were announced. So maybe a better way to look at the situation would be to count the number of ships that safely operate cruises – the vast majority – rather than focus on the few incidents where problems occur.

Finally, with this issue I am sorry to announce that Tony Davis is stepping down as our cruise news correspondent. Tony has been providing copy every month for more than eight years, during which time he has consistently supplied interesting news about the latest cruise happenings. Based in Gibraltar, he is able to obtain photos of many cruise ships as they call at the port, and his photographs have added interest to the column. Thanks for your hard work during your time with us, Tony, and we wish you well in the future . . . hope you don’t miss those deadlines too much! 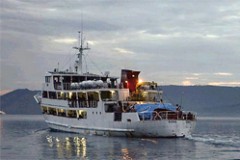 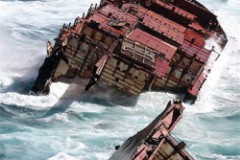