This year Is one in which several significant anniversaries are being marked. The two particularly notable ones are the 70th anniversary of D-Day in June and the centenary of the outbreak of World War I in September. The commemorations of D-Day received considerable national media coverage and, while the role of the soldiers, seamen and airmen was rightly highlighted, it should also be pointed out that the armada of ships was made possible by the efforts of shipyard workers, designers and others back in the UK, who might not have taken part in the landings but whose contribution was considerable, and they should be remembered. 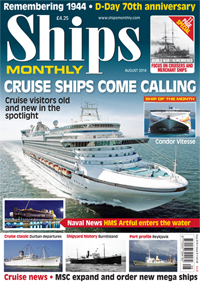 The other major anniversary which will be marked later in the year is the centenary of the outbreak of the Great War. To commemorate this, we have two articles in this issue which look at the involvement of two very different types of ship. Merchant ships played a significant role in various aspects of the conflict, and they are featured on page 26, while the development of cruisers and the part they played is examined on pages 20 to 25.

We also have two features on cruise ships, one showing classic liners in their post-war heyday departing the South African port of Durban, and the other covering modern cruise ships around the UK, Europe and further afield, which shows how the cruise industry continues to grow. But I wonder, could those who built ships before and during World War I, or those who fought on the beaches of Normandy, ever have imagined the level of luxury now enjoyed by many on a modern cruise ship?