Just when it seemed ships were as big as they could get, along come Maersk and place a huge order for a series of massive new container ships. The recent announcement is the most significant event in the shipping industry so far this year, with the new boxboats, at 400m in length and capable of carrying 18,000TEU, set to become the biggest such vessels ever. It seems the industry is coming out of the global recession successfully, and Maersk must be confident that the container business will continue to boom. From the point of view of the overall pattern of world trade, taking into account the ever-expanding Chinese economy, the ships make sense. Container volumes between Asia and Europe are expected to increase by five to eight per cent a year up to 2015, and the new Maersk ships will cut the cost of shipping a container from Asia to Europe by 26 per cent compared with existing vessels on the route. 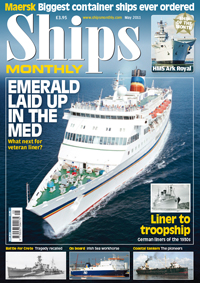 Looked at as technological marvels, the huge new ships represent the cutting edge in terms of naval architecture and environmentally-friendly shipping. Clever design has enabled them to accommodate significantly more containers without being much longer than the 396m Emma Maersk class vessels, while the latest hull and engine technology will enable carbon dioxide emissions to be cut by 50 per cent.Not only has this order for new container ships been placed, but several new cruise ships have come into service recently, notably the RCI megaships Allure and Oasis described in recent issues of Ships Monthly. Innovative cargo vessels are also being built, such as the car carrier City of St Petersburg (featured on page 7), while P&O have their new ferries for the English Channel. However, closer to home the prospects for the Royal Navy are not so bright, and this month’s Ship of the Month (see page 33) looks at the aircraft carrier HMS Ark Royal, which has ended her service days. It seems that while the commercial world is expanding, the navy only has cuts to look forward to, despite the crucial role its ships played in rescuing people trapped in Libya during the recent uprisings.