As I write this editorial, trying to keep warm in the middle of December, with Christmas approaching and plans being made for 2013, my mind turns to the year just gone and I am wondering – what has been the best ship of the year? Awards are commonplace on TV and in the national media at this time of year, so I thought it would be appropriate to ask Ships Monthly’s many knowledgeable readers what they considered to be the best ship of 2012.We have featured many interesting ships in the Ship of the Month section, while in the regular View from the Bridge at the back of the magazine the captains of many different vessels, any of which could be considered as a ship of the year, have been interviewe

d. Of many new craft entering service in 2012, the ro-flex Bore Song, featured in February, set new standards in freight transport. Seven Havila is probably the most technologically advanced ship, and has already gained her own accolade as Support Vessel of the Year 2011. Several historic ships have been featured and are worthy of our attention, with Titanic leading the way, as the centenary of her tragic sinking was marked in the spring. The Royal Yacht Britannia is also worthy of consideration, as is the classic liner SS United States. On the ferry 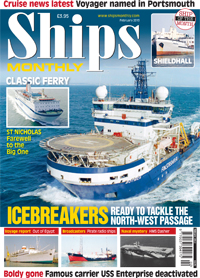 scene, Spirit of France debuted in February 2012 to join her sistership as the largest ferries on the Dover-Calais route. But maybe it was one of P&O Cruises’ cruise ships, involved in a spectacular get-together in July, which caught your eye? Or is there another ship which you think is more worthy to be ship of the year?

My own choice would probably be the cruise ship Marco Polo, on which I was fortunate enough to enjoy a trip down the picturesque Norwegian Fjords. This historic vessel is still going strong, having already given many years of outstanding service, and she now undertakes unusual cruise itineraries that take her around the world, where her graceful lines can be admired by all. But which ship do you think is worthy of the title Ship of the Year? 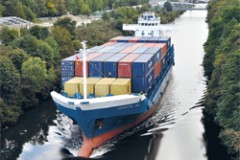