The maritime world never stands still, and as the new year gets under way many significant changes in the major areas of shipping are taking place. On the naval front, the government’s strategic defence review is going to reshape the Royal Navy and cut its size considerably. In the ferry world, significant new tonnage has arrived on the English Channel, while over on the Irish Sea a major shake-up of services is taking place. The cruise industry welcomes several new ships, with the mighty Allure of the Seas featuring as our Ship of the Month. Impressive though Allure and her sistership Oasis of the Seas are, the two giants seem to divide opinion. Their purpose is essentially a commercial one, with the passenger experience of primary importance, but it seems their exteriors alienate lovers of more traditional-looking ships .

An area which has received little attention is the government’s short-sighted scrapping of the emergency towing vessels (ETVs) that are stationed around the UK coastline. These purpose-built tugs will be withdrawn from their stations in Stornoway, Lerwick, Dover and Falmouth when the current contract with Klyne Tugs ends in September. The government believes ‘state provision of ETVs does not represent a correct use of taxpayers money and that ship salvage should be a commercial matter’. But removing ETVs will save just £32.5 million over the Spending Review period, and at what potential cost? 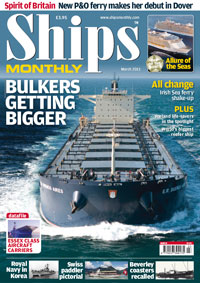 The ETVs were introduced following the Braer tanker disaster in 1993, which resulted in 86,000 tonnes of oil polluting the seas around Shetland, and is a safeguard against future such incidents. So their withdrawal begs the question how much would it cost should another oil tanker be wrecked on our shores? And wouldn’t it be worth the government’s while to look across the Atlantic at the Gulf oil disaster and the massive costs involved there? If BP had shown a little foresight, that tragedy would never have happened. The government’s withdrawal of the ETVs represents a similar lack of foresight.

Finally, thank you to all those readers who wrote or emailed with so many positive comments about last month’s issue of Ships Monthly. A selection of opinions can be found in Ships Mail on page 60.