She was a 10,500dwt bulk carrier, with four holds separating the aft and midship accommodation/bridge, and a further two holds forward of the bridge. She was a tramp ship, and was used to carry any type of bulk cargo. Like most of the Stag Line vessels, she often traded in the Great Lakes when they were ice-free.

In 1965 she had a career change when she was converted by Readheads into a cable layer, and Harry Pollitt’s photograph was taken while she was loading cable in Manchester, at BICC’s (Glovers) submarine cable loading gantry on Trafford Wharf, Manchester Docks, prior to sailing to New Zealand, where the cable was laid in the Cook Strait. The job was completed in May 1965, and for a while she remained on charter to BICC, laying a further cable between the islands of Trinidad and Tobago.

Following the removal of the cable-laying gear, Photinia returned to tramping. In May 1978 she was caught in a bad storm while anchored off Milwaukee in Lake Michigan and was driven aground, fortunately without loss of life. She was declared a constructive total loss, but was eventually refloated and towed to Sturgeon Bay, where her machinery was removed. Over a year later, in November 1979, she arrived in Kewaunee, Wisconsin and was broken up for scrap. In 1961 Photinia had cost £919,216 to build and 17 years later, as a total loss, she realised £953,426 from insurers. 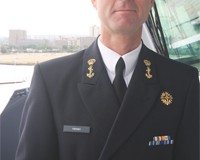