Why did you choose a career at sea?I have no idea. My father was in the Air Force, but I think the sea is in my blood. When I was very young, about four years old, my mother took me on the old train that ran around Liverpool Docks and showed me the ships and the cranes. From then on, a career at sea was all I ever wanted, so much so that I went to HMS Conway from 1963 to 1965.

How did your early career develop?I first went to sea in 1966 as a cadet with P&O on the cargo ship Bendigo, followed by time on a Trident tanker, which I didn’t enjoy at all. Then the new Strath class ships Strathardle and Strathbrora came into service from the UK to the Far East, followed by Orcades and Oriana, and I worked on them. I am also a fully qualified submariner and worked in the RNR after I left P&O, with Vickers Oceanics in Barrow-in-Furness, working on submersibles in the oil industry. My first command was Flexservice 3, followed by her sistership Northern Installer, a saturation dive boat and cable layer.

Where did you go next?In 1996 I decided to go back to passenger ships and was appointed master of Hebridean Princess, and in 2001 developed and cruised with Hebridean Spirit worldwide (Scotland’s only international cruise ship) until her demise, although I did move with her, as she became the private yacht Sunrise. I also did a couple of years with Captain Cook Cruises in Australia operating their cruise ships in Fiji – a very beautiful part of theworld.

What is this ship like to workon?She is different, very different. She is chartered to Cruise and Maritime Voyages, so I have to be aware of their product as they would want it. At the same time I have to look after the owner’s interests. You also have to be a diplomat, and when walking around the ship I talk and chat with everyone. Shaking hands with 640 people in an evening at the start of the cruise is also a bit different.

What are the routines on board the ship?We have a crew of 320 comprising 18 nationalities, and they have gelled, although dealing with the public is never an easy thing. Most of our guests are over 60, which can bring its own challenges. If, for example, some have mobility problems on an excursion, we have to put the needs of many above the other passengers while keeping the first group happy too.

What has been your most difficult experience at Sea?Like most captains, I have had my fair share of bad weather and in the cruise industry you are planning early, so if we can’t make a port we have to have another plan lined up. My most interesting experience was near an atoll in the Indian Ocean, where we sent a small tender boat in front of us sounding and looking for the coral. But we did actually touch it and so we decided to go back.

What is the most useful innovation you have seen in your time at sea?Without a doubt I have to say GPS. We still have charts, but knowing exactly where I am any time is very useful. The Traffic Separation Scheme is also very useful in congested sea areas, and communications have advanced tremendously over the years. Shipping has been made so much safer by schemes and technical advances like these.

What do you do when you are not at sea?I came out of retirement to start Discovery up this year and now I am doing this cruise, I am on a voyage contract so I will go back home to just outside Barrow-in-Furness, from where I spent much of my earlier career at sea on ships built there. But I have been happily married to my wonderful, understanding wife for 39 years, and this may have something to do with staying in the area. The seamust be in my blood, so if I’m not on it I love to be near it, and during the ‘retirement’ I even qualified as a pilot for the local port of Silloth – just to keep my hand in, so to speak 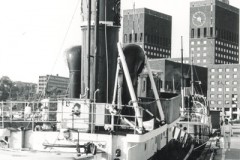 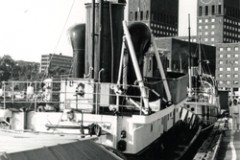