Captain Ian Hutley has had a long career at sea, starting with P&O cargo ships, and later P&O cruise ships. But he is now a senior master with Red Funnel on waters much closer to home, as he explained to Nicholas Leach during a crossing from Southampton to Cowes.

When did you start your career at sea? I started my career at sea 33 years ago, working for P&O’s cargo division. My first ship was Stratherrol in 1981, which operated on worldwide cargo routes. As a cadet I also worked on my first passenger ships, namely Oriana (the original), Canberra, Uganda and Royal Princess. I then worked for P&O cruise ships, starting in 1988 back on Royal Princess. P&O’s Oriana was my first command, in 2005. I have since captained Oriana, Adonia, Aurora and Arcadia and spent a year with Cunard’s Queen Victoria. The traditional liners were good, but the facilities on the modern ships are so much better.

What came next?I left the cruise line industry for a life ashore so I could be closer to home rather than being away for such long periods, and joined Red Funnel in November 2013. I am senior master on Red Eagle, one of the company’s three Southampton-Cowes ferries; each of the three ferries has a senior master who is responsible for the day-to-day running of the ship.

This is the first of the three Red Funnel ships to be refurbished. What has changed?The main change was the addition of the top two lounges, while a total refurbishment of the old lounges on B deck was also carried out. The open deck areas have been replaced by enclosed lounges to provide more seating for passengers, particularly when the weather is not so good. We did struggle in the saloon area before the changes were made when the ferry was busy, while we still have outside seating on top.

What are the crewing arrangements? On the ferries we have two deck officers, two engineers (chief and mechanic), and three ABs as crew; so seven in total on the deck and technical side. The catering staff numbers vary depending on how many passengers we have on board and the season. During a busy time like the IOW Festival we were carrying 900 passengers per crossing, but usually average 400 on a summer crossing, and we would then have six people on the catering side, although we often have a couple more.

What shifts do you work?One shift is ten hours, and another is 12, depending on when you start. We work four days on, four days off, but the catering staff have different rotas. Some crew also work on the high-speed service run by Red Funnel. We can be working 13-hour days during the summer. The ship will make seven round trips a day, totalling 14 crossings, while in the winter we operate a two-ship service. This means that one ship can be taken out of service from November to April for refurbishment. This November it will be Red Osprey, to be refurbished, and she will be followed by Red Eagle at the end of 2015.

What’s the most useful innovation you have seen during your time at sea?The most useful innovation has been the introduction of electronic charts, where you can superimpose a navigational chart on to a radar picture. This is great for immediately identifying the ship’s position, in relation to the land while also giving immediate charted depths, and automatically recording the ship’s position. It is very useful. 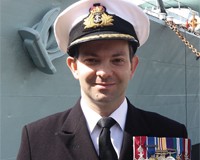 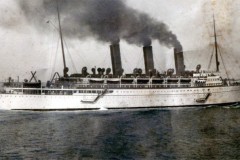