Filling a gap in the market and proving a success in her first year, the ferry Julia enjoyed a good debut season on the Swansea-Cork route. Captain John Grace talked to Nicholas Leach about working on the ‘people’s ferry’, as his ship is known.

How did you come to work for Fastnet Line?The operational director of Fastnet Line, Owen Barry, used to be superintendent with Irish Ferries, and I sailed with him on Normandy. I had just left Irish Ferries, having worked with them since 1987 and as captain since 1999, when he approached me. I took redundancy in 2006 and was reemployed by DFM/IF. Owen asked me to join the new operation in March 2010 having provided Fastnet Line with the technical know-how to get the ship to Cork, and the service started.

Is the ship well-suited to the route?When Fastnet Line was looking for a ship, Julia was seen as a possible candidate for the route – but did she have the capacity? The speed? And could she fit into Swansea? She is 154m, the maximum length of ship that could use the port. The draft, which is 5.8m, is also a factor because of the big tidal range in Swansea. Fastnet Line have signed a five-year contract with the port of Swansea, which is going to make some improvements to the berth and passenger facilities.

How involved were you in getting the service started?I started in March 2010 as master, having had experience with ships such as Oscar Wilde, and gained Cork and Swansea pilot exemptions. I was on the first crossing, but not as captain. Three captains were trained: Michael Poole and Ivan Walsh, as well as myself.

How has it worked out during the first season on the route?It has been a very good first season, with the projected carryings figures exceeded. We initially restricted the maximum number we could carry because we were still finding out about the capacity and capability of the ship. The capacity officially is 1,433, but we have not carried over 1,000 as we need more Pullman lounges where people can sleep. The four-berth cabins are often occupied by just two people, which reduces capacity. The route is ideal for overnight crossings, unlike any other on the Irish Sea.

How has the ship been altered?She has hardly been altered internally at all, apart from some cosmetic alterations, and is well-suited to the route as she is. She had Stockholm doors fitted to minimise free surface in the unlikely event of the car decks being flooded.

What are the crewing arrangements? Where are the crew from?We carry 71 crew and they come from all over Europe, as well as Ireland. Many are from eastern Europe, as we used manning agencies in Latvia, Estonia, Poland and Bulgaria to get the crew. Some crew worked with Irish Ferries including the officers, while manning agencies provided the other officers. The Second Officer, Sinead Nic Giollarpharaic, is from the Aran Islands, and the Chief Engineer, Bob Ives, is English.

What shifts do you and the crew work?We have ten-and-a-half-hour shifts to comply with international legislation, and these can be split. My typical shift would see me called half an hour before we enter port and take the ship in, and then work on management matters until lunchtime. I am off duty in the afternoon. In the early evening we prepare for the sailing. I work two weeks on and two weeks off, while non-UK based crew work two months on and one month off.

How do you see the future forFastnet Line?I think we have a niche market on this route, and despite the tourism downturn caused by the economic issues a year or so ago, we seem to be picking up sufficient numbers. There is definitely a market for this route as it reduces driving for holiday-makers going to SW Ireland compared to other ferry routes. 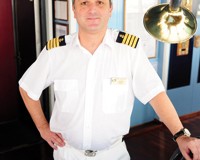