Captain Niels Vestergaard, master of Sirena Seaways, talks to Nicholas Leach about his career, the newly-renamed ship and the recent unfortunate accident that saw the ship in the headlines.

How long have you worked on Sirena Seaways?I have been working as master on Dana Sirena, which became Sirena Seaways in March as part of the DFDS rebranding process, since 1 September 2008. Although the ship was not built for the route, having been designed as a ro-ro vessel for the Mediterranean, she is well suited to the North Sea. When DFDS acquired the ship, they added more cabins, and she is now more or less perfect for this route. We carry a mix of freight and passengers and, although we cannot compare with the speed of the airlines, we give good service and offer a relaxing and easy crossing. During the summer our major income comes from passengers, and this summer we have been completely full.

How did the accident occur to the ship at Harwich?I was not there at the time of the incident. Naturally, we have discussed it internally, and it is very important that we learn from experiences like this in order to help improve processes and procedures. However, this incident is currently being investigated by the UK authorities, who have not yet concluded their report and I am therefore not in a position to comment on the specifics of the incident. What I can say is that the crew onboard all our ships are very practiced in reacting to emergency situations, and the crew did an excellent job and both passengers and crew were safe at all times.

How long did the repairs take?We were off the route for 14 days in total, at Bremerhaven, including the sailing to and from Esbjerg, as the damage to the ship was not too bad. One of the bow thrusters had been damaged, but the damage to the berth in Harwich was more significant.

How long have you been working for DFDS?I have been with DFDS since 1976 and I have been on ferries since 1988. I studied at the famous Seaman School in Svendborg. The first ship I served on was Ontario, which was sailing between Denmark and South America carrying meat and coffee. I worked on a variety of DFDS cargo vessels, but for most of my career I have worked on passenger and ro-ro ferries, including as Chief Officer on Dana Anglia out of Harwich, as well as Prince of Scandinavia on the Gothenburg to Harwich route. I started relieving as Captain in 1996 and 1997 on some routes and in February 2000 I was promoted to Captain on Tor Caledonia, from Gothenburg to Immingham. I have been Captain of Prince of Scandinavia, Princess of Scandinavia, Duchess of Scandinavia (from Cuxhaven to Harwich), and both Princess of Norway and Queen of Scandinavia.

What are the crewing arrangements on this ship? We have around 60 crew during the summer, which drops to 32 as a minimum during the low season in January and February, and the crew are mainly from Denmark. Most of the crew work in the hotel department, with 14 crew needed as engineers and officers to sail the ship, leaving the rest to work as service crew.

Do you have any unusual tasks?In the off-season, on a Monday afternoon and Tuesday morning, we have taken day-trippers for four-hour trips to the windfarms off Horns Rev and these have proved very popular, offering passengers a meal on board, letting them see the windmills, and it promotes the ship, which is completely open so they can see what is offered.

How have ships changed since you started in the industry?The increasing use of computer systems and greater mechanisation, controlling everything from ballasting to the loading ramps to the handling of the lines, has enabled reduced crew numbers. Ships have also got bigger, especially on routes such as Oslo-Copenhagen and Newcastle-IJmuiden, as greater volume means an increased turnover per crew member. The stopping of tax-free services had a big impact, as did the cheap airlines, and we now have to offer passengers a much better experience. Loading and discharging freight is also easier, as the faster the turnaround the more economical the ship’s operation. 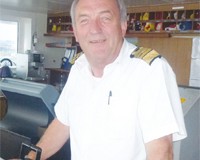