Captain Orpheus Kekus, master of Anglia Seaways, time chartered by Seatruck from DFDS for the Dublin-Heysham route, talked to Nicholas Leach about his career and his current command.

When did you start your career at sea?

I graduated from the maritime academy in Gdynia in 1989 with a degree in nautical sciences and went straight to sea. I started with Polish Ocean Lines on the Baltic. In 1992 I started working for Danebrog on the North Sea on board the freight ferry Naesborg operating between Belgium and the Thames.

What did you do next?After working on Naesborg, I returned to Polish Ocean Lines to be closer to home, working two weeks on, two weeks off, with the ship operating between Poland and Sweden. From 1995 I went as a junior officer to Eurolink Ferries, whose ships traded between Vlissingen and Sheerness, but the service did not work out. I got promoted to Chief Officer with Eurolink in 1997, and when Eurolink ceased trading I moved to Dartline on ships running from the Thames to Belgium and Holland and was promoted by Dartline to captain.

Did you want to work in the ferry industry?Yes, I have always wanted to work on freight ferries because the pilotage knowledge was more challenging and interesting, more so than on deep-sea ships. Pilotage on ships out of the Thames is complicated and requires considerable knowledge and experience.

How did you come to work on this ship?I worked on Dart 9, which was at the time one of the biggest freight ferries on the Thames, for eight years until 2007. When Dartline was taken over by Cobelfret, a new crew was placed on the ship, so at that point I applied to Maersk, who asked if I would like to work for Norfolkline. After several interviews, I was appointed as a master with Norfolkline on the Irish Sea. My first command was Mersey Viking, taking her over from Italian owners, and I was on her for a couple of years before moving to Liverpool Viking. When DFDS bought Norfolkline, selling some ships to Stena, I stayed with DFDS. In February 2011 I delivered Liverpool Viking to the Baltic, and returned to the Irish Sea to take over as captain on Anglia Seaways, which was being chartered out to Seatruck. The ship started trading for Seatruck in early 2011, for 12 months. From January to May 2012 she was on various DFDS crossings in the North Sea, including the Immingham-Rotterdam and Rosyth-Zeebrugge routes.

What have your recent movements involved? From the middle of May we started working on the Belfast to Heysham route, but when that was closed in August we moved to Dublin-Heysham. The crossing time is eight hours, and we do two crossings a day, giving us about four hours in port. We have to complete a round trip in 24 hours, sailing in the morning and the evening, but we provide a service as a third ship for Seatruck, departing Heysham at 0200 and Dublin at 1500. The ship is well suited to the Irish Sea, and fits the ports well. She is the right size and powerful enough to handle the Irish Sea, which has worse weather than the North Sea. She has an excellent design, with powerful thrusters and Becker rudders, which assist manoeuvrability, so she can get in and out of ports easily, particularly small ports such as Heysham, even in strong winds.

What are the crewing arrangements?We have a mixture of Polish, British and Danish crew, with a total of 21, working two weeks on and two weeks off. The other captain, Forbes Ure, is from Scotland. On board, we ensure the ship is able to deliver the services, we maintain the vessel, and ensure the cargo is safely loaded and delivered. The Chief Officer is responsible for cargo operations, while I work with the officers to manage the various aspects of the ship. My major duties are pilotage and berthing, but I also deal with budgeting and overall ship management.

What do you do with your free time?When I go home, I usually drive across Europe, going from Heysham down to Dover, across to France, and then to Gdynia. It can take about 11 hours to make the journey across Europe. I have done some amateur motor racing in the past. I have even driven round the Nurburgring and enjoy driving . . . fast! 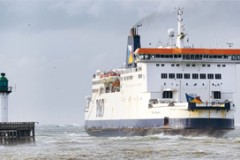 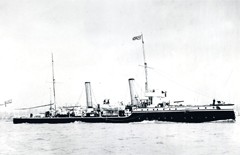