To introduce our fantastic P&O Ferries competition, found on page 65, Captain Peter Holt, senior master of the Hull-Rotterdam Europoort multi-purpose ferry Pride of Hull, talked to Nicholas Leach about his career at sea and his ship.

When did you start at sea?I went to sea aged 16 and did a four-year apprenticeship with Ocean Transport and Trading. The first ship that I served on was the general cargo ship Mano running to West Africa. Starting in 1974, I did my cadetship and gained my second mate’s ticket when I was 20.

What were the first ships you served on?I served on most of the Ocean Transport ships, spending the most time on Barber Blue Sea ro-ros going around the world. I usually joined the ships in America and then went to the Middle East, to the West Coast of the USA, and then back to the US Eastern Seaboard via the Panama Canal. That round trip took 90 days, and we were carrying containers and ro-ro cargo. The ships had huge ramps and could carry tracked vehicles, diggers and cars, as well as yachts and pretty much everything. They included Barber Priam, Barber Persius and Barber Hector.

What companies have you worked with?I spent 12 years with Ocean Transport and Trading and was made redundant when the company started contracting. I found work ashore with Atlantic Container Line in their Southampton Office, and spent four years there. I never thought I would return to sea, yet I went back with P&O North Sea Ferries.

On which P&O ships have you served?I started with P&O on 6 November 1990 and have been with the company ever since, always on the North Sea. I have served on Norsea and Norland, on the Hull-Zeebrugge route. In February 1994 I did my maiden voyage on Norbay as Second Mate. I was seconded to a couple of freight ships in 1996 and was promoted to Chief Officer on 1 June 1997 on Norbay. In April 2000 I was seconded to the newbuild team for Pride of Rotterdam and Pride of Hull, spending a year in Rotterdam, and our small team looked at every aspect of the ship and its operation.

How long have you been on this ship?I was on the maiden voyage of Pride of Hull from Fincantieri, Italy as Chief Officer in November 2001 and was on board during her entry into service on 2 December 2001. I served as Chief Officer and started relieving as Master in May 2002, and on 1 April 2004 I was promoted to Master and appointed to Pride of York. I served on her for four years, and transferred to Master of Pride of Hull in January 2008.

What are the routines on board the ship?I work 14 days on and 14 days off, and so my opposite number works when I am off, and vice versa. The ship does one crossing overnight, and we are in port during the day, leaving at 2100 and arriving at 0700 every day, stopping for two days at Christmas and two days at New Year. Bad weather could stop us, but this is very rare indeed, and it is more likely we would be delayed.

How well suited is the ship to the route?She is purpose-built for the route and serves the overnight crossing very well, with a good mix of passengers and freight. We carry 100 lorries every night, and the schedule is designed for drivers who could be using the ship every night. She has side loading, separating car passengers and giving them a dedicated deck away from the freight, which loads via the stern. 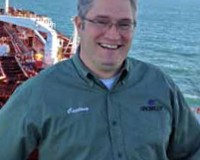