Are you from a seafaring family? No, not at all. I grew up in East Berlin and left school when I was 16, got a job as a car mechanic and then completed my military service. And I only joined the East German Marine to get out of East Germany. I worked as a deck hand and got my AB licence and Ships mechanic licence. When the Berlin Wall came down it allowed me to travel the world and seek other shipping work. I first went to sea aged 22 on board the general cargo ship Frankfurt Oder. I later worked on a car ferry as Second Officer and then as Chief Mate on a container ship operated by Columbia Shipping Line from Cyprus.

What specialist knowledge do you need to work on this ship?You must have some experience of ice and be prepared to be entirely flexible when visiting areas that are not that well charted, and be prepared to do your own charts and soundings and also use celestial navigation. The adventure cruising side takes you to both poles and anywhere between. You have to expect the unexpected and be cautious towards the weather, especially so in Antarctica.

What were your most memorable voyages?Apart from Antarctica and South Georgia, sailing along the Amazon from Manaus to Equita and a jungle river cruise in the Amazon basin is special. Ushuaia is my favourite port. After a trip in Antarctica it’s like coming home, you know you’re going to get a good meal and a sound bed. The expedition cruising world is very small and you always meet friends there.

What has been your most difficult experience at sea?In South Georgia, trying to get 120 people off a beach with zodiacs when a 90 knot wind sprang up was very difficult. The wind can come out of nowhere down there. That’s another aspect of adventure expedition cruising – you have to co-ordinate with the expedition team all the time.

How does poor weather affect the ship?She is actually very stable in poor weather, and the biggest problem can be whether or not to launch the zodiacs for the passengers. That can throw out our whole itinerary and force us to move somewhere else so a whole new programme has to be constructed. In expedition cruising we sometimes have to change or abort the landing, as the wind or swell can be dangerous. Most of our guests are seasoned adventure expedition cruisers and they understand this.

What do you like most about Expedition?The cosiness! She’s very manoeuvrable and the spirit of the company and adventure travel comes through here. We feel like a family from the first day. We have 53 crew made up of seven nationalities. My Hotel Manager is Brazilian, Second Officer Ukrainian and the chef and waiters/cleaners are Filipino. In Expedition Cruising you have to be a diplomat and an entertainer we only have 125 guests and inevitably you will meet the guests as you walk around the ship.

What is the most useful innovation you have seen introduced in your time at sea?Electronic charts, although, having said that, we are constantly changing and adapting charts according to the waters we enter. In one year we can find ourselves in the Antarctic, Caribbean, Atlantic Islands, Mediterranean, Baltic, British Isles, Arctic and Greenland. 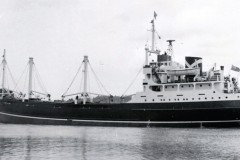