Master of ro-pax ferry Celtic Horizon, which serves on the Rosslare-Cherbourg route between Ireland and France, talks about his career and work to Jehan Ashmore.

Do you come from a seafaring background?My father served with Irish Shipping and was Captain with B+I Line, serving on their first fast ferry, the passenger-only jetfoil Cu Na Mara, and from the age of 14 I realised a career at sea was for me.

Where did you study?I started my cadetship with Scottish Ship Management Hogarth & Lyles Cape and Baron handy-sized bulk carriers and studied at Riversdale Regional College, Liverpool. This was followed by studies for the rest of my certificates at Cork’s Regional Technical College.

What other companies and vessels did you serve on in your career?I worked for Denholm Ship Management on ACT and City boxboats and bulk carrier divisions, B+I Line’s ro-ro Tipperary and on the lo-lo containership Wicklow.

What was your first command?I Joined Sally Line’s Ramsgate-Dunkirk/Ostend routes in 1995, and got my first command of Eurotraveller (ex-Sally Sky) in 1998; she now sails as TransEuropa Ferries’ Larkspur. Following the demise of Sally Line, I was transferred to DART Line, mostly on the Dartford-Zeebrugge run on DART 8, a former COSCO ship converted for ro-ro service. Following the closure of Dart Line, I spent a short time with Irish Ferries’ Oscar Wilde, then moved to Meridian Marine Management’s Norman Voyager, which was on charter to Celtic Link Ferries until Celtic Horizon took over in 2011 under CLFs own management.

How much can the ship carry?We have a certificate for 960 passengers, 200 cars and 130 trucks in total. However this can include up to 20 livestock trucks. The service is unique in that we operate the only regular cattle service between Ireland and Europe.

What challenges does the continental route bring?

Weather conditions during the winter can be challenging, with storm force winds and large swells, particularly off Land’s End. The bad weather is most predictable from the Atlantic and it is sometimes necessary to hove to off Falmouth.

How do you find the Visentini-built ro-pax performs?Celtic Horizon has more space and a higher standard of passenger facilities than her near sister Norman Voyager. They are a successful design and have been good for this route.

What is your working roster and nationality of the crew?My work pattern is three weeks on and three weeks off. The deck crew work to a different schedule and they are made up of Irish, Italians and Latvians,and the catering staff are mainly Portuguese.

Describe the ship’s repositioning voyage from Italy to Ireland.The vessel had worked as Cartour Beta for C&T’s Naples-Sicilian routes, and we departed Palermo bound for Rosslare to bring the ship to Irish waters. We called at Gibraltar to load bunkers, and during the five-day voyage had a wonderfully smooth passage. Unfortunately, that changed when we started working the route, and she was definitely put through her paces weatherwise.

What is the breakdown of traffic?Year-round we carry livestock trucks, and accompanied and unaccompanied freight units. We import French-built trade cars and carry tourist cars, coaches and camper vans. This year’s (2012) tourist trade is slightly up on 2011 and we hope passengers will enjoy the ship’s superior accommodation.

What is the average fuel consumption for each crossing?Consumption is economical and we use less than 50 tons of intermediate fuel oil per crossing. The route could be sailed in 14 hours at 25 knots, but to conserve fuel we average 17.5 hours at 19 knots.

How has equipment improved?Satellite navigation and communication is of course now an integral part of operations, and as far as passengers are concerned we have wi-fi available.

How do you manage the route?I like to promote good communication between all departments and shore staff, and so a morning meeting is held daily for senior officers, and a masters meeting on Sundays, to ensure progress and improvements are maintained. On Mondays and Tuesdays the vessel has a lay-over period in Rosslare, when supplies and any maintenance required can be attended to. As for fuel, this is taken every three weeks at Cherbourg.

What is the most rewarding part of your job?Each day is different, and this makes it interesting and rewarding. We all work towards maintaining a friendly and safe operation for passengers and crew. 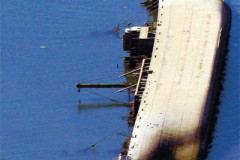 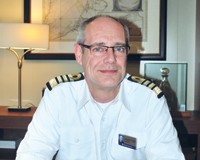