After joining the Royal Navy, the Type 45 destroyer HMS Dauntless was the first of the class to visit London, the first to fire the new Sea Viper anti-aircraft missile and also operated with the US Navy’s aircraft carrier USS George H Bush. Patrick Boniface caught up with her commanding officer Captain Will Warrender to discuss his career in the Royal Navy and the ship he commands.

Why did you choose a career at sea with the Royal Navy?I was born in Ferozpore in India, but I was brought up in the Lake District, a long way away from any maritime activity. However, I moved down to Plymouth in the mid-1970s and at that stage, when I was six years old, I knew that a career in the Royal Navy would suit me. My father took me on two occasions to Plymouth Navy Days, and the impact of what I saw at such a young age made me sure of what I wanted to do. We saw the type of capability that the Royal Navy had. The Royal Navy is a fantastic employer with all sorts of different job opportunities.

When did you join the Royal Navy?I joined the Navy straight from school when I was 19, but I have been very fortunate that in addition to a number of professional qualifications that I have gained I have also been able to conduct a BA degree and a Masters degree at Shrivenham together with a host of other professional courses. I see that you have served on the minehunter HMS Cromer, destroyers HMS Glasgow and HMS Newcastle and the frigate HMS Cornwall before you took command for the first time. I commanded four ships prior to taking over on HMS Dauntless. These were two mine counter-measures vessels, HMS Chiddingfold and HMS Cattistock, and I then commanded the Type 23 frigate HMS Argyll for two years. After that I had another opportunity to go back to sea to command HMS Montrose for six months.You were promoted to Captain in April 2011 and your latest command is one of the newest and most capable ships in the fleet.I am extremely proud to be in command of HMS Dauntless. The Type 45 is the most advanced air defence destroyer in the world and provides huge flexibility to the Royal Navy and I think gives the Navy the ability to influence events at sea and land and in the air, providing that all-important choice to military and political leaders. I have been in command for six weeks (at the time of writing, September 2011) and I am now fully acquainted with the ship and, perhaps most importantly, my ship’s company. Does HMS Dauntless live up to her name? And is she a bit daunting, as she is a big ship at nearly 8000 tons displacement? HMS Dauntless has a ship’s company of 220 and with over 760 compartments. The great thing about the Type 45 is that she is a big ship with provision to insert future new technology as and when it comes along. 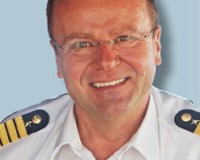