HMS Lancaster is one of the Royal Navy’s 13 Type 23 Duke class general purpose frigates. Patrick Boniface caught up with her commanding officer, Commander Peter Laughton, who discussed his career in the Royal Navy.

How were you attracted to a career in the Royal Navy?The Royal Navy seed was firmly planted in me at the age of 12, when I joined my local Sea Cadet unit, TS Benbow, in London. The ensuing experiences and sense of adventure I enjoyed over six brilliant years with the cadets were invaluable and provided a superb springboard for my entry to Britannia Royal Navy College, Dartmouth.

What ships have you served in since you left Naval College?I have been fortunate to serve in 13 different ships, ranging from patrol vessels (based in Hong Kong and Northern Ireland) to various frigates (Type 23) and destroyers (Type 42s), as well as four very enjoyable years serving in Sandown Class Minehunters as a Mine Warfare and Clearance Diving Officer. I was honoured to enjoy my first command as a Lieutenant when assigned to the Hunt class Northern Ireland Patrol Vessel HMS Dulverton, which was based in Faslane. 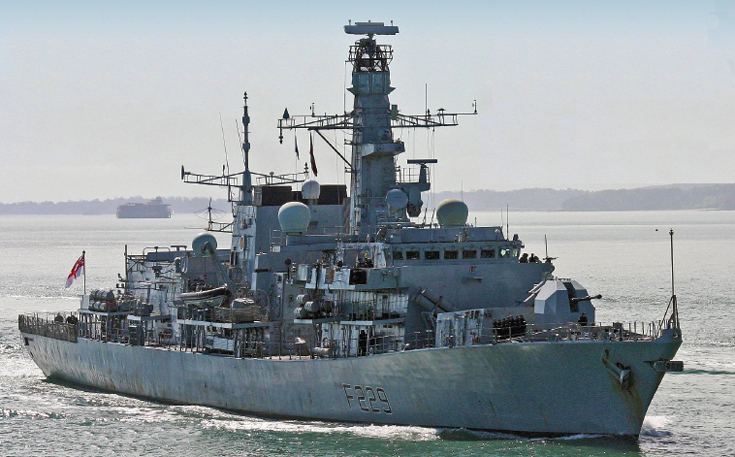 Describe your day-to-day duties as a commander of a RN frigate. I believe my ‘Command Aim’ encapsulates everything we strive to achieve, that being to maintain HMS Lancaster at the required level of operational capability to meet current and future operational outputs, while fully recognising the key contribution of our people. No two days are the same, but that defines the fun and excitement of life in the Royal Navy. As a commander of a frigate, it’s ultimately about protecting our nation’s interests by promoting partnerships around the world, protecting our economy and trade routes, providing security at sea with our international partners and preventing conflict by deterring threats and reassuring regional powers. Ultimately we have to be ready to fight and win at sea, on land and in the air. Basically, I am responsible for the safety and welfare of the 200 sailors on board and for ensuring that, when the call for fire comes through, we proudly stand ready.

Do you have a favourite ship you have served on? They have all been favourites, but if I had to choose one it would be my current ship, because I am so honoured to lead such a talented and capable ship’s company that have proven themselves both on operations and during training.

Has life changed in the Royal Navy since you joined?In some respects much has changed, but in other more subtle ways very little has. We are smaller, but we still maintain an enviable reputation for our fighting ability, and our people remain the best trained in the world.

HMS Lancaster has been very successful recently in an anti-drug role; can you tell us aboutthis?From May to December 2013 Lancaster clocked up over 30,000 miles in the North Atlantic and Caribbean, making 20 port visits to 18 different places, undertaking a range of tasks across the region in support of British interests, including defence of UK overseas territories, counter narcotics, and being on standby for hurricane relief. On six separate occasions, she detected and disrupted narcotic traffickers at sea, seizing drugs that would be worth £160 million on the streets – that is 1.2 tonnes of cocaine and approaching one and a half tonnes of cannabis. Lancaster also detained 23 drug-runners.Her presence in the region made a big difference to the illegal drugs trade, dissuading drug runners from attempting to smuggle illegal narcotics.

What do you do to relax when you are on leave and away fromthe ship?Blessed with a loving and supporting family, I endeavour to enjoy time with them whenever I am home – their unwavering and loyal support has been the bedrock of my career in the Royal Navy. When time permits beyond family commitments, I enjoy escaping to the South Downs for a blast on my mountain bike or to walk my dog. I alsoenjoy reading and learning to playthe ukulele.