Commander Walter Hansen attended the DSEi exhibition in London in September 2013 along with his, then yet-to-be-commissioned ship, Holland class patrol vessel HNLMS Groningen. Patrick Boniface caught up with Commander Hansen to talk about his ship and his career.

What is it like to be in command of such a modern and capable warship?I feel privileged to be in charge of such a ship. It is not just the ship, but a combination of the crew and the ship. You can always have a good ship, but you also need a good crew, and we have a dedicated group who make the picture complete.

Tell us about your ship.She was designed on what we call the Naval Study 2005, which specified replacements for a couple of frigates. We were to replace them with ships which are specifically designed to do everyday tasks, which we do 90 per cent of the time, with our role being maritime security. That involves counter piracy, counter drugs, border patrols in Europe and the Caribbean and a lot about safety at sea. We can also render assistance with our fast interceptors and helicopter, and with the storage facilities we have on board. In the storage hold we can operate an emergency hospital and even put in a decompression tank and cooling containers for food supplies ifnecessary.

There is a lot of innovation in the ship’s design, including the layout of the bridge and operations room. The operations room is just in front of the bridge and provides us with more space, as well as being the communication centre. In the old-fashioned ships the ops room was deep inside the ship. Looking at the tasks I described earlier, we have quite a good sensor fit, which enables us to gain situational awareness. We have the same radar as an old frigate. We cannot deploy any missiles, and our main assets are the helicopter, which can be on deck at any time, and the two fast interceptors. They are our main weapon systems. We have a huge crane, which can lift up to 25 tons, and we can store two containers. So our weapons are not missiles or guns, but rather the assets that we can bring to our taskings. 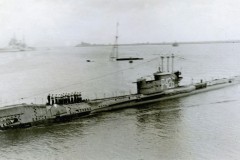 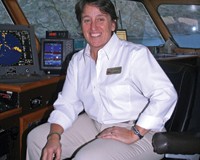