Can anyone identify this small coastal vessel, which bears the name Anzac? Where was the photo taken? Who was she operated by, when and where was she originally built, and what was her fate? 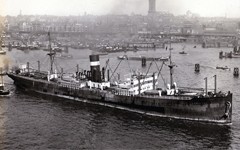