The February 2014 mystery ship is the motor vessel Lancashire Coast, built for Coast Lines, Liverpool. One of a class of two (the other being Cheshire Coast), Lancashire Coast was a product of the Bristol firm of Charles Hill and was completed in April 1954, with a length of 256ft and a service speed of 12 knots. Registered in Liverpool, Lancashire Coast (1,283gt) was employed on various Coast Lines trades, becoming well known in Belfast as she operated on the Antrim Ore Traffic trade. On 29 September 1965 she was transferred to the Belfast Steamship Co, but ownership reverted to Coast Lines from 1967 to 1972. She was rebuilt by Harland and Wolff in 1969, and in 1972 was again transferred to the flag of the Belfast Steamship Co, averaging of three round trips a week between Belfast and Liverpool. In 1980 Lancashire Coast was sold to Middle East interests, renamed Paolino, and used as a sheep carrier until being broken up in 1985. 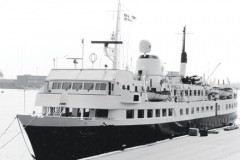