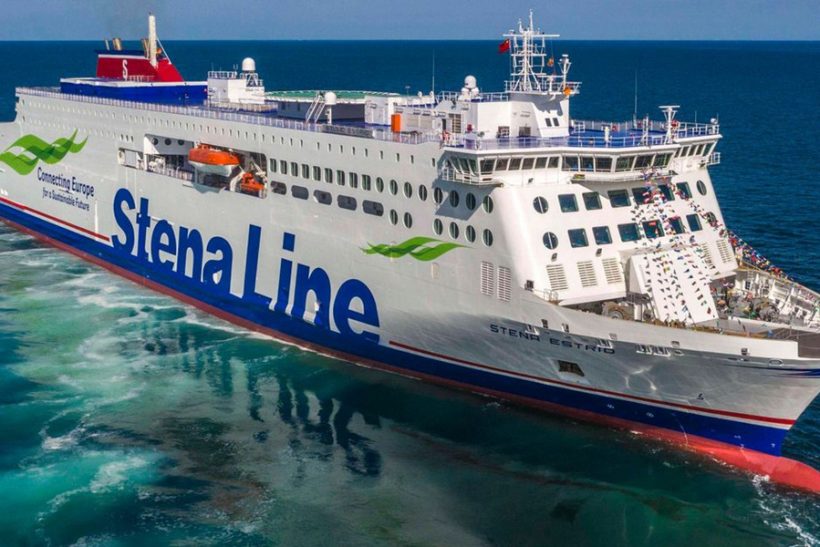 Future ferries for the coming decade

Russell Plummer turns the spotlight on over 30 ro-pax vessels in excess of 30,000gt that are due to enter service from this year into 2024.

[The full article can be found in Ships Monthly, March 2020. Buy your copy here: https://shop.kelsey.co.uk/issue/View/issue/SMO2004/ships-monthly-march-2020]

More than 30 large new ferries are set for construction and delivery into 2024, with two thirds of these coming from yards in China, among them impressive products of the 42,000gt Stena E-Flexer series carrying 1,100 passengers and with 3,600 lane metres of vehicle space.

Taking shape at the Avic Weihai Yard in Shandong Province, they will join the fleets of DFDS Seaways, Brittany Ferries and the Stena Group, with the latter being the driving force behind their design and construction.

The Swedish ferry giant’s Irish Sea route between Holyhead and Dublin welcomed the first E-flexer, Stena Estrid, at the beginning of 2020, with sisters Stena Edda and Stena Embla due to follow later in the year and 2021. 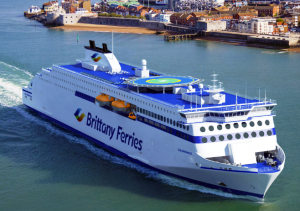 Brittany Ferries are set to long-term bareboat charter three E-Flexers, on order from Avic Weihai, for services between Portsmouth and Plymouth to Northern Spain, with the first, Galacia, scheduled for late 2020 delivery. Both Salamanca, expected in 2021, and a third vessel to be added in 2023 as Santona will be LNG powered. Brittany Ferries also hope that the much delayed 42,500gt Honfleur will finally appear from FSG at Flensburg, to enter service from Portsmouth to Caen-Ouistreham opposite Mont St Michel (2002/35,592gt), with current second vessel Normandie (1992/27,541gt) switching to sail between Portsmouth and Le Havre.

While work on the E-Flexer series has been under way, the Avic yard has undergone a major change of ownership, with just under 70 per cent of total shareholding now owned by the state-controlled China Merchants which, in the process, became the country’s fourth largest shipbuilding group. Stena have since ordered two enlarged E-Flexers for delivery in 2022, with increased length, from 214.5m to 239.7m, to boost vehicle capacity by 500 lane metres to a total of 3,600.

In contrast to the overnight sailings role for the first vessels, including 23-hour trips to Northern Spain for the Brittany Ferries trio, an E-flexer is also heading for DFDS Seaways’ 90 minute Dover-Calais crossing. Keel-laying for Cote d’Opale, took place late in October last year. She will enter service at the start of a ten-year bareboat charter from Stena in 2021 showing how the design can be adapted from overnight ferry to short route day vessel.

P&O Ferries have also placed a major two-vessel order with Guangzhou for their Dover-Calais route for a 40,600gt/230m pair designed by Danish naval architects OSK-ShipTech, expected in service during 2023. Costing £130 million each, they are to be double-ended, with two bridges cutting out the need for in-port berthing movements, and saving seven minutes on outward and return journey times.

A unique bow shape will reduce wave resistance, especially around thruster openings. Accommodation for 1,500 passengers is to come in a two-decks-high central structure, with double-height panoramic windows along with 1,500m2 of outside deck space.

TT-Line Tasmania hope to get their largest ships to date for the Port Melbourne-Devonport route. The presently unnamed 50,600gt pair on order from FSG are due for delivery from Flensburg in 2021. Germany’s TT-Line has looked to China for the first time, with a pair of 45,000gt vessels on order from the Jinling yard, planned for completion this year, for 800 passengers and 4,600 lane metres of cars and trucks on Germany-Sweden services from Travemünde to Trelleborg. This route is currently maintained by Nils Holgersson (2001/36,458gt) and Peter Pan (2001/44,245gt), which was lengthened by 30m early in 2018.

The largest vessels in the current order books are two 69,000gt giants for Italy’s Moby Lines, which are due in 2022 from the Guangzhou yard at Nansha in China. They will take 2,500 passengers and 1,300 cars on vehicle decks with a total of 3,800 lane metres. Initially, they will be scrubber-fitted but are LNG ready, with scope for fuel tanks to be installed later. Designed for the Livorno-Olbia route, they will have Mediterranean-style stern-loading, with escalators to take foot passengers to the upper decks.

Two other ferries in excess of 60,000gt are due to come on stream this year: a still to be named 67,300gt Irish Ferries ro-pax from FSG offering cabin berths for 600 of a 1,800 passenger total, and Viking Line’s first order from a Chinese yard, the 63,800gt Viking Glory, to be delivered by Xiamen Shipbuilding in December for service in the Baltic between Finland and Sweden.

Viking Glory will be the world’s first vessel with Wärtsilä 31DF dual-fuel engines running completely on sulphur-free liquefied natural gas, and is to be able to use biogas when it becomes a viable alternative fuel in the future. The six engines will give a service speed of 22 knots; there will also be sail assistance from two top-deck towers as the vessel replaces Amorella (1988/34,384gt).

Tallink have confirmed that the near sister to the 2017-built 49,134gt Megastar will be named MyStar. Work is due to begin in spring 2020 at Finland’s Rauma Yard, with delivery expected towards the end of 2021.

Gotland Rederi AB have also placed a first order in China for the 32,313gt Thjelvar to boost the Destination Gotland fleet and await imminent delivery of the 1,650-passenger/1,750-lane-metre vessel from Guangzhou. Nearer home, the Spanish yard of Barreras at Vigo is set to deliver an as-yet unnamed 39,761gt vessel for Western Mediterranean service in the Spanish Armas fleet. 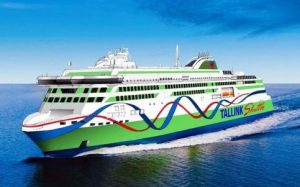 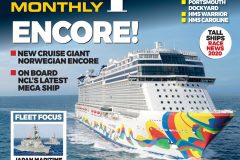 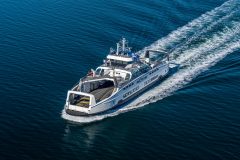