Giles Wade, Senior Master of Condor Vitesse, which operates between Poole and Weymouth and the Channel Islands, talks to Richard Webber about his career and life at sea.

Do you come from a seafaring family? My grandfather ran a small tug and boat building yard constructing wooden yachts. Although he had never worked away at sea, he was licensed as a Trinity House Pilot on the Essex rivers. My parents are keen sailors and I was brought up around small boats. However, I am the first in my family to have gone away to sea.

What inspired you to make a career in shipping? I grew up listening to Grandfather’s stories of piloting small ships and his life on the rivers. Once I’d settled on the idea of going to sea when I was about 15, there was no going back. I gained a Cadetship with P&O Containers, attending Glasgow Nautical College for my 2nd Mate’s and Chief Mate’s certificates.

What ships did you serve on before joining Condor?I spent 11 years with P&O Containers, although the company changed to P&O Nedlloyd during my time with them. I served on most ships in the fleet, trading to the Far East, Australasia and the US. I had a very happy few years as 2nd Mate on the City of Cape Town (ex-Table Bay 1977) trading between Tilbury and South Africa.

When did you join Condor? I joined Condor Ferries in 2004 as Chief Officer and was promoted to Relief Master in 2005. In 2006 I was given a permanent Master’s position. 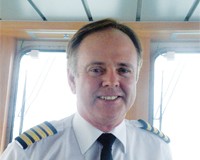