On 22 September 2010 the third Type 45 guided missile destroyer for the Royal Navy, HMS Diamond, was accepted into the Royal Navy at her home port of Portsmouth. After the ceremony Patrick Boniface spoke to her commanding officer, Commander Ian Clarke RN.

You must be really proud to be HMS Diamond’s first commanding officer.I am very proud. It’s taken a lot of hard work to get her ready to this stage up at Scotstoun, physically preparing the ship, working alongside BAE Systems, getting our own ship’s staff moved on board and getting the ship ready to go to sea for the first time. In parallel with that, in Portsmouth half the ship’s company have been working on board HMS Daring to build up their ship knowledge. I am really proud of the team. I have not done it on my own and passing the Round Tower as we came in this morning was a really special moment.

In your acceptance speech, you spoke of the similarities and dissimilarities between this and the last HMS Diamond.This is the 13th HMS Diamond and I am not a superstitious man, thankfully. The Diamonds have a great history, with battle honours going back to the Armada in 1588. The previous HMS Diamond was built on the Clyde, where this one was also constructed, so there is a historical bond between HMS Diamond and Clyde shipbuilders.

As regards your own career, why did you join the Royal Navy and go to sea?I grew up in Dover, so I always had an interest in the sea, and my grandfather was in the merchant navy. He’s something of an inspiration to me, and when I was considering careers at sea the Royal Navy appealed.

What ships have you served on?As a junior officer, I was a navigator on the Ton class minesweeper Wilton, and then I was officer of the watch on HMS Coventry, patrolling in the Adriatic in the mid-1990s, undertaking peace-keeping operations off Yugoslavia. I vwas operations officer on HMS Peacock leading up to the handover of Hong Kong, and I commanded HMS Orwell for a while, after which I went to the MoD for a short period. When I returned to the Navy, I was operations officer on HMS Manchester, which set me up nicely for HMS Diamond. For the last two years, I have commanded HMS Tyne and HMS Clyde, the former on fishery protection duties and the latter in the South Atlantic as the Falkland Islands patrol vessel.

What’s your favourite command?Come on, it’s fairly obvious. . . ! On a serious point, to command any Navy ship is a privilege, and it’s not about the hull as such, but rather what you can see around you now – in other words, the men and women under your command. That’s what command is about, and to be a credible Navy you must have a reputation for being really professional, which is something that comes from having highly-trained and motivated people who know their equipment and how to do their job. And knowing what we’re going to be doing in Diamond over the next few months and years.

The previous Diamond had a reputation for collisions, so are you afraid of damaging a warship worth £1 billion?I can’t wait to get on with operations! The Navy is very good at preparing people for appointments at the highest level. We’re very well trained to do the job and, as we go through our careers, groomed for command. I commanded HMS Orwell, which was a 900-ton 48m vessel, and then I moved up to HMS Tyne and HMS Clyde, which were a little bit bigger and a little bit more capable at 2,500 tons. Now I have a Type 45, which is a step up again, and I am champing at the bit. 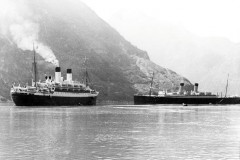