The mystery ship is the Swedish-owned passenger/car ferry Öresund, the hull of which was built in 1960 by Sölvesborg Varv Ab, Sweden (yard no.55) and towed to Aalborg Værft, Aalborg, Denmark to be fitted out. She was completed in 1960 (yard no.132), named Öresund and entered service with RAB Öresund, on the Malmö-Copenhagen route.

In 1980 she was sold to Ångfartygs Ab Saltsjön-Mälaren, Stockholm and rebuilt for cruising by Nico Group, Göteborg, being renamed Lindblad Polaris and used for various cruises. In 1986 she was sold to a Bahamas-based shipowner and renamed Polaris and used for cruising in the Galapagos Islands. In 2008 she was renamed National Geographic Polaris but two years later reverted to Polaris for a final voyage to breakers in Ecuador. 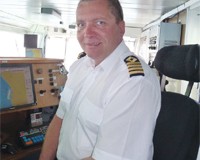 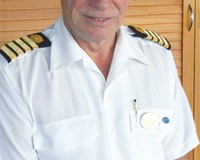